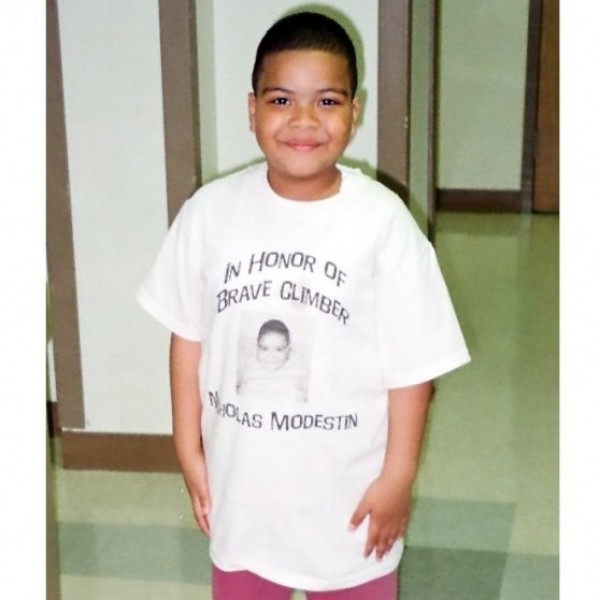 Seven years ago a courageous boy was diagnosed with ALL Leukemia and during his battle to defeat Leukemia, he had to learn how to walk and run again at 2.5yrs old. Today Nicholas Sebastian Modestin is cancer free and alive to see another beautiful day. Thank you God for looking over Nicholas and protecting him during the most difficult part of his young life. After 3.5yrs of climbing over many obstacles, on August 23, 2012, surgeons at The Brooklyn Hospital Center took out his mediport and Nicholas won the fight to crush out Leukemia. On September 22, 2008, he was diagnosed with High Risk Acute Lymphoblastic Leukemia (ALL). During the month long stay in at The Brooklyn Hospital Center Pediatric Oncology Unit, at the start of his chemotherapy treatment, Nicholas was hit with several major big complications and two surgeries. First the doctors found a large adrenal tumor in his tummy which needed to be resected within the first week of diagnosis, second his brain got swollen from a mini stroke and the third was the biggest hit when the swelling from both sides of his brain went down. The toughest complication to Nicholas was a rare side effect called Acute Leucoencephalapathy from the mini stroke which led to severe weakness of all his lower extremities and almost crippled him. This meant after the swelling went down on the right side of his brain, it affected the motor skills of the whole left side of his body. This left Nicholas not walking or standing on his own for couple months and leaving his left side of his body weak in strength and in his bones. With an unbalance gait and rigity body, starting all over for Nicholas was rough, but his spirit and perseverance surprised his oncologist, doctors and physical therapist. The dedication and the intense hard working physical therapy team of therapist got Nicholas back walking strong mentally and physically. Even though he is not back 100% and walking with a limp, his motivation during therapy and walking with a foot brace keeps him on the road to a full recovery and running at full speed. Today his oncologist calls him "The Miracle Baby" for his ambition, grace and courage. Nicholas’ ambition during physical therapy is paying off, as every day is a challenge of getting his mind and body stronger. His determination to build back up his legs goes to his support and spirit of his physical therapy at Support By Design, Hospital of Special Surgery and at PS 11 after school for five days a week. Nicholas will be 10 yrs old on 3/7/2016. He is in 4th grade at PS 11 in Brooklyn and is excelling in his teacher's class. Everyday he is challenging himself to get back strong to put the strength back into his left leg. During his time away from school and homework, he continue to build remote control Lego machines. Everyday is a beautiful day for Nicholas. Today we realize with the sickness of Nicholas that nothing in the world is more important than life itself. Today the best lesson Nicholas has taught us is no matter how bad your day is going there is always better days ahead to smile and appreciate. LOSING IS NOT AN OPTION – Nicholas and other kids around the world are battling cancer is our greatest inspiration to continue advocating for childhood cancer awareness and hoping to find a cure. “We never say "Why" We say Crush It".