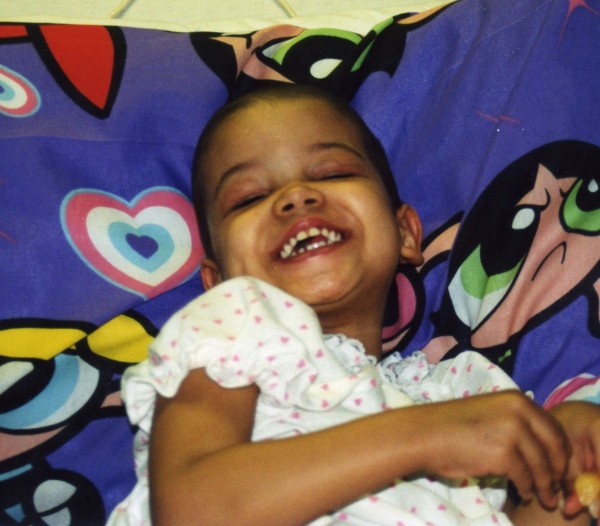 King of Prussia, PA, US

Brianna was born into this world on June 9, 1998. I knew she was a girl from the moment I found out I was pregnant. I was so excited and our little family was complete at that moment. She was a spit-fire from the beginning, she was full of life, lots of attitude and a take no stuff kind of girl, just like her mama :) On October 13, 2000 our life as we knew it ended. She went from having possible allergies to bruising to not be able to walk due to what we thought was a hip injury. That Friday our Pediatrician sent us to Children's Hospital of Philadelphia and I knew from what I had read what they would tell us. I prayed I didn't, but the news came, she had Childhood Acute Lymphoblastic Leukemia. She went into remission quickly and easily and so we settled in to this new world and this strange group that you just don't want to belong to but you are glad you are not alone. She did well, grew well and was her usual self, throwing doctors out of her room, bouncing on the bed with no immune system demanding room service or to go home, lol. Playing barbies on the floor, riding her car through her living room (the hallways, lol). Then her 3rd birthday came around and I knew something was wrong, she wasn't acting well. They assured us she was fine, so on we went until the end of July when they took us into this room filled with doctors and sad looks and said the cancer was back and it had mutated. She then had T-cell ALL which at the time was so rare only 1 other kid was alive and he was a teenager. They had this agressive plan, we fed her vitamins and Juiced her and it just kept coming back. Finally, she said she didn't want no more hospital and no more pins (needles), the doctors said there were only experimental drugs left so on October 10, 2001 we took her home on hospice....They said we only had weeks..But Brianna as usual had other plans and did things on her terms.. A few days after we brought her home, we took her off the morphine because she had no pain and she drank lots of Juices daddy made and took lots of vitamins and had tons of smiles and energy. She played, laughed and had lots of fun up until the last few days she was here.... On January 19, 2002 at 4:00 am. Brianna left us quietly while we were in the kitchen, she had told us she was going home to Jesus a few days before and would have her hair back. I know she does... Brianna is forever my little best friend as she called me :) My hero and a true inspiration and lesson about strength and living life on your terms to the fullest. So every year in her Memory we have done the Light The Night Walk for the Leukemia and Lymphoma Society. This year we are hoping our team can reach $5000 total and I ask that you help make this possible... Thank you, ~~Tammy aka Breezysmom~~