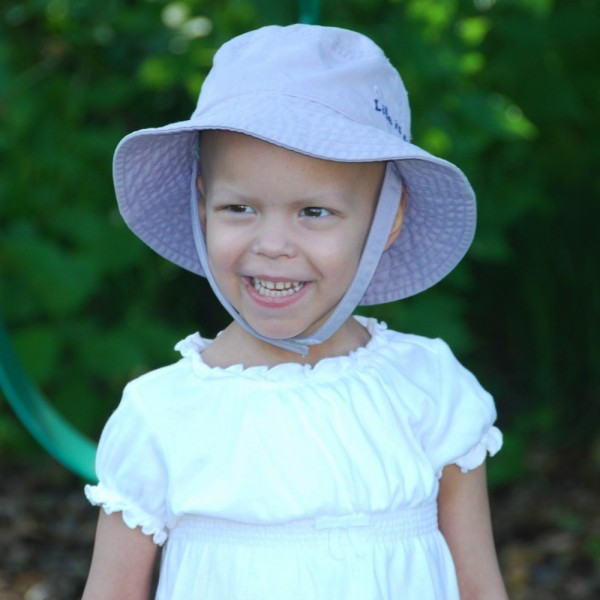 The Children's Hospital of Philadelphia Alfred I. Dupont Hospital for Children of the Nemours Foundation

One of five St. Baldrick's Foundation 2011 Ambassador KidsA Mother’s Memories – Written by Amy, mother to Arden, who lost her life during her battle with cancer:

If you found her playing, you would see a head of tousled, tangled, straight blonde hair framing a cherubic face, with eyes downward, intently focused on her puzzle. You would notice the shockingly long lashes gently touching her apple-red cheeks, and the sweet, perfect, pink lips pursed intently in concentration. And when she looked up, her bright smile would melt your heart.She had a vocabulary beyond her years, calling birds, dogs and ﬂowers by their speciﬁc names, like “robin, Dalmatian, or daylily.” She was already adept at working the mouse and keyboard of a computer, and she had most of her favorite books and songs memorized. If you stopped to play with her, you might see the limitless breadth of her imagination as she shared one of her invented stories. She loved to play with cars and trains as much as doll houses and princess gowns. If you asked about her favorite color, she would look down at what she was wearing and respond with that day’s hue.When you had to leave, she would open her arms, run up and give you one of the warmest, tightest, most earnest hugs you had ever received.This was Arden at two years old. This was Arden before cancer.

Just a month before her third birthday, an E.R. resident told us that they had found a tumor in Arden’s abdomen; she had stage IV, high risk neuroblastoma. At this age, she had already astounded us with her charm, wit, intelligence and beauty, but from the onset of her treatment, she amazed us with her bravery. She was able to calm herself down before scans and sedations, to quickly recover from surgeries, and to eventually take needle sticks without shedding a tear. She was a ﬁghter, and seeing her frustration over feeling sick, having to be constantly examined by multiple doctors, or having to return to the hospital again and again through her treatments was heartbreaking. While receiving high doses of chemotherapy, she started learning to read and accomplished writing her own name. She could pronounce the names of medical instruments like “stethoscope” and “otoscope.” She was compassionate, drawing cards and posters for other children, her cousins, or her baby brother, whom she adored. She was funny, putting stickers on herself, mugging for silly camera shots, and dancing, shaking her booty for the video camera. She was keenly aware of how sick she was, knew she was in a “belly hospital,” and was determined to get well. When we received good news that her tumor had responded to chemo, she gleefully ran around our hall, telling the nurses, “The thing in my belly is shrinking! The thing in my belly is shrinking!”In the end, during the most difficult times, she would tell me, “It’s okay, Mommy.” Every single day, no matter what challenges she had endured, she said, “I love you, Mommy. I love you, Daddy.”

This was Arden, our Arden. She remains with us in our hearts and minds today, teaching us the importance of love, faith, hope, humility, compassion, and courage. She reminds us to look beyond our grief, that we need to appreciate all of the blessings in our lives, and indeed, to appreciate life itself. We share Arden’s story with the hope that those who wish they could have met her understand the critical need for funding research, speciﬁcally for pediatric cancers. We need more effective, less toxic treatments so we can see more children like Arden grow up and live long, productive, amazing lives. We are so very grateful to the St. Baldrick’s Foundation for focusing on the research that will lead to those cures.

Arden Quinn was a vibrant, intelligent, endearing little girl. To all who knew her well, she was a healthy, happy, energetic preschooler with a quick wit and an active imagination. One Tuesday night in October of 2007, she woke up suddenly screaming in pain, covered in sweat, with a temperature of 93. She was rushed to the nearest ER. It was one month before her 3rd birthday.After an abdominal X-Ray and lots of waiting, Arden 's family was told to go home and follow up with the pediatrician in the morning. The next day, Arden was more herself, and the pediatrician said that she should start on medication to rule out constipation. The doctor also provided a list of "things to watch for." Sure enough, by Thursday morning, Arden was very still, didn't want to be moved, had no appetite, and a low-grade fever. Her parents took her to A.I. duPont Hospital for Children in Wilmington , DE , and after a series of tests, doctors found a tumor measuring approximately 10 x 6 cm in her abdomen. Further testing confirmed that Arden had stage IV, high risk Neuroblastoma.Throughout her 8 months of aggressive treatment at A.I. duPont and The Children's Hospital of Philadelphia per the "gold standard" protocol, Arden 's family knew that their little girl had a fighting spirit. By July of 2008, after her second stem cell rescue, she was fighting for her life on an oscillator and ventilator in the PICU at CHOP for five weeks, having gone into respiratory failure after contracting Respiratory Syncytial Virus (RSV) (which presents as a bad cold to most of us with normal immune systems). Although she developed Acute Respiratory Distress Syndrome (ARDS) and Systemic Inflammatory Response Syndrome (SIRS), no one, not her parents, family, friends, supporters, or world-class doctors ever gave up hope for her recovery. Finally, on August 30, 2008, despite all efforts to the very end to save her, Arden 's journey ended peacefully and painlessly, with her Mommy and Daddy by her side, finally able to hold her and rock her as they said goodbye. She remains with them every day in their hearts and their minds as they transfer their hopes for her survival to all of the other children who are still fighting.