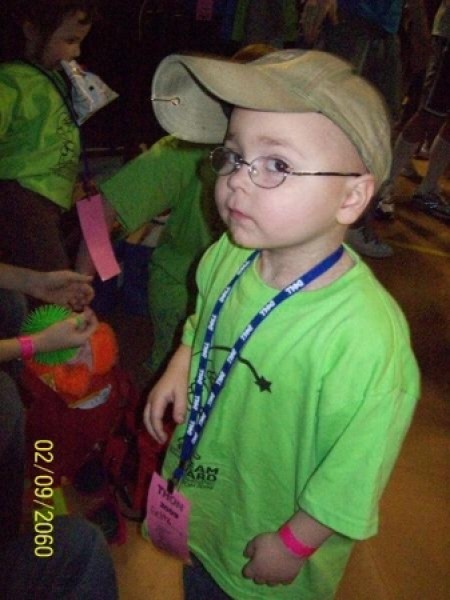 Sean Geltz Jr. was a normal 3 year old boy until 2 weeks after his birthday cancer reared its ugly head within his body. Sean was diagnosed with AML (Acute Myelogenous Leukemia) on June 12, 2006. With his first round of chemo Sean had a 90% chance of going into remission. Well, he was that 10 % that the chemo didn't work for. We tried a second round of chemo, which held an 80% chance of him going into remission. Yet again, he was the 20 % that it didn't work for. After two failed rounds of chemo, Seans last chance at life was a stem cell transplant. On September 15, 2006 Sean received an allogeneic stem cell transplant, from an unrelated cord blood donor. On December 5, 2006 we finally got the good news that Sean was cancer free! It was not an easy battle to get to that point by far. Sean was diagnosed with Graft vs. Host disease (GVHD) of the skin and the gut, high blood pressure, stunted growth (stopped growing), permanent hair loss, numerous infections, chronic lung disease and osteoporosis, just to mention a few things that were caused by the treatment. Although today Sean is cancer free, his battle is far from over. He is currently struggling with chronic Graft vs. Host disease, Osteoporosis and his most concerning issue, chronic lung disease. Sean is now 5 years old and although he has thinned hair and is shorter then most of his peers, he looks like a normal little boy on the outside. By looking at him you would have no idea the battle his is fighting within. Sean's lungs are failing due to Bronchiolitis obliterans, which is a rare and life-threatening form of non-reversible obstructive lung disease along with chronic pneumonia, chronic lung disease and collapsing of his bronchial airways. At one point we had hope that he would be able to receive a double lung transplant, but the catch to that would be that Sean would have to be cancer free for 3 years before the National organ donors association will even consider putting him on a transplant list. Sean will not be three years cancer free for another 10 months. The way his lungs are declining, the doctors do not expect him to make it to the date for the transplant list. Currently the doctors are doing what then can to keep him comfortable. Sean is still on the "O.K." side of things and he lets nothing hold him back, yes he coughs allot and he is short of breath most of the time, but he never stops! I am happy to say that he started T-Ball this year and is loving every minute of it! Sean wants nothing more then to be just a kid and everyday we are doing our best as parents to allow him to be just that. Hope never dies!