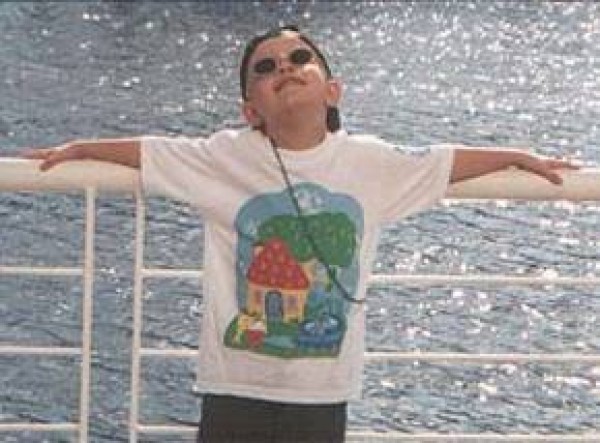 Our Kind, Brave, Fun-loving Son. That's the epithet that sums up as best as we could in just a few words, the life of one of the most magnificent people we have ever known. We realize that we are his parents, but Chris truly was an outstanding 11 year old boy. Chris was lucky enough to come into our lives just before we left active duty with the US Army. Before we settled down into what we thought would be a normal suburban lifestyle in Florida, we got a RV and roamed around North America for 7 months. As a 3 year old, Chris was able to visit all 50 states, each province in Canada, as well as each of the border-states in Mexico. Moving around with a toddler was a very rewarding experience, but, like most folks, we had to pick a place to live. We chose Tampa, where Chris enrolled in preschool, as we took up new careers. Not too much later, Chris began to gradually become tired when playing, and his legs seemed to be always bruised. After an ear infection cleared as a result of medication, but his fatigue and bruising did not, we asked the pediatrician to do a routine blood test because we thought that perhaps he needed a vitamin or two. That led to an absolutely horrible day on what should have been his graduation from pre-kindergarten " the day that Chris was diagnosed with wide-spread neuroblastoma, a very aggressive childhood cancer " but a day that saved his life, at least for a while. He had multiple tumors in many different areas: bony areas, soft tissue, and even 2/3rds of the space where his bone marrow should have been had been replaced by the disease. Over the course of the next nearly 6 years, Chris endured 34 cycles of chemotherapy " many of them were high dose, in order to try to overtake the aggressiveness of this disease. He also underwent 3 major abdominal surgeries, which included the removal of his left kidney and adrenal gland, as well as of his liver along with a brick-sized tumor. Chris endured two back-to-back stem cell transplants, using his own bone marrow stem cells to try to jump start his damaged immune and blood systems. He was subjected to two cycles of radiation therapy, as well as about 20 cycles of immunotherapy, which was offered only in New York. Then there were, of course, hundreds of blood and platelet transfusions, along with the bone marrow aspirates and various scans. Yet, there was something about Chris that allowed him to do more than simply endure such hardships. After the first cycle of chemotherapy, Chris began feeling more like himself. He actually thrived during these difficult years. Chris loved to move, dance, act and sing; he did so just about every opportunity that he had. Although the disease and/or its intensive treatments robbed him of the usual youthful stamina of most 5 " 11 year olds (medium size kids, as he called them), Chris was able to lip-synch and break-dance to his favorite songs. He loved tae kwon do, which he started when he turned 5 years old because he liked the cool moves of the Power Rangers. Often bald and sometimes wearing a surgical mask during lessons, Chris steadily advanced through the ranks until he earned his First Degree Black Belt as a 9 year old. Chris also steadily worked his way through Cub Scouts, partly as a Lone Scout and partly as part of a regular pack, until he crossed over into becoming a Boy Scout a week before he passed away. He had a wonderful gift of storytelling, which over the years evolved into stories such as Me and My Big Fat Treehouse, The Adventures of Superguy, and Pixies: the Chamber of Stinkies. He also had a clever sense of humor, which complimented the stories as well as musical lyrics, which came so easily to him; Chris sometimes would just rattle off an entire song before the words could be captured in writing. All of this came in handy as Chris made do with his very unusual lifestyle that revolved around treatment. The seriously suppressed immune system required that Chris educational needs be met through a patchwork of Homebound Education, hospital teachers and any supplemental experiences that we provided whenever and wherever. That didn't really bother Chris though, who looked forward to whatever new experiences each day brought. He had a smile or a joke for nearly every situation. In fact, he is still remembered locally and in New York as the boy who passed out smiley face pins to everyone he met. During his first hospitalization, medical technicians and nurses tried to alleviate his fears because they knew he'd have to spend a significant amount of time there. So they gave him trinket gifts at each scan or test to thank him for his cooperation. Even though he did not feel well, Chris wanted to give something back to people around him. It was his idea to have a bowl of chocolate Hugs and Kisses from Chris sitting in his room for the benefit of everyone who took care of him. It was also his idea to share a smile with everyone, especially those who looked like they really needed one, so he began handing out smiley face pins to everyone. He truly gave them to everyone: other patients waiting in the same waiting room for their own tests or scans, and even tired waitresses at restaurants who looked like they could use a smile. That simple act by a child made most of those people return a real live smile back to him and perhaps with other people as well. Indeed, most of the medical people who took care of Chris at the two primary hospitals where he received care, still wear their smiley face pins on their lab coats or ID badges.