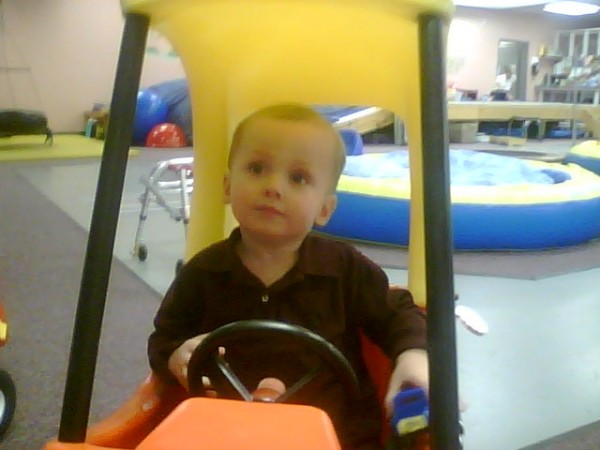 Two-year-old Campbell Bradley of Easley will head to Baltimore at the end of February to begin two weeks of intensive physical therapy, along with shock therapy, to combat neuroblastoma, a cancerous tumor that begins in nerve tissue of infants and very young children. Campbell was diagnosed at just three days old and began his first round of chemotherapy at six days old. Already, Campbell has been through a number of surgeries for bone marrow aspirations and biopsies and has had three rounds of chemo. "At that point we stopped with the treatments, thinking that the tumors would go away completely on their own," said Campbells mother, Andrea Bradley."But the tumors actually began growing rapidly and became larger." By April 08 even more nerve damage had occurred, making it impossible for Campbell to use his legs or feet at all. "We started chemotherapy again, and the doctors told us it would take between eight and 10 more treatments before the tumors began to shrink or go away," his mother continued. "But after just four more rounds of chemo, Campbell was diagnosed cancer free and the tumors were gone! Praise the Lord!" Although Campbell is now cancer-free, he has suffered a lot of nerve damage inside the spinal column(where the tumors were, and he has very little feeling in his feet and lower legs. Campbell has began to crawl and gain strength, but more intense therapy is needed. The only pediatric clinic that has such therapy is in Baltimore, Md. "In December of 08 we were told by the Kennedy Krieger Center in Maryland that they think with their therapy Campbell can really benefit and hopefully regain a lot of the strength and lessen the nerve damage!" Bradley explained. "We leave for our first two- week stay at the end of February and will continue these stays for throughout 2009."