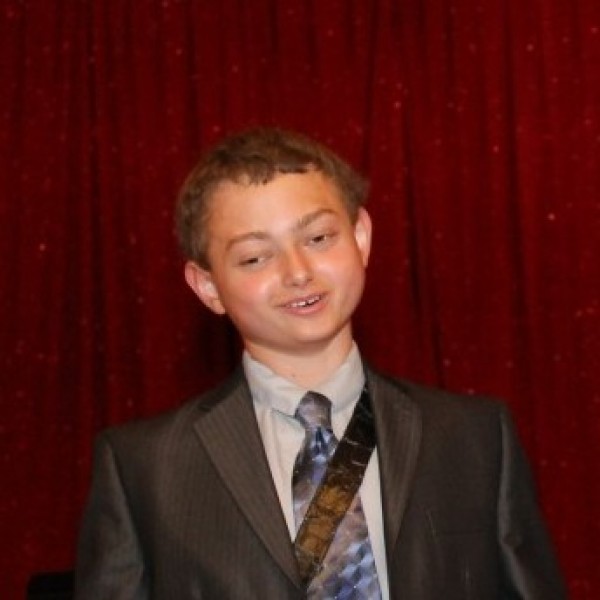 At 5 years old, Harley was diagnosed with a brain tumor growing from his optic nerve that made him blind. In 2003 through 2009, he had two rounds of chemotherapy to stop the tumor from growing and multiple brain surgeries to remove a cyst around the tumor. In 2013, he was diagnosed with Myelodysplastic Syndrome (MDS) which turned into Leukemia while he was waiting for a bone marrow transplant 2016. He had many accomplishments for such a young man. When he was 7, Harley made a goal to see all 50 states by the time he was 10. He finished this goal at Four Points (Arizona, New Mexico, Nevada, Colorado) 1 week before his 11th birthday. Harley was an avid Braille reader and won 1st place at the Central Texas Regional Braille Challenge 7 out of 8 years he participated. He won 3rd place in 2013 and 2nd place in 2015 at the National Braille Challenge in Los Angeles, CA. Harley loved music. He learned to play the piano when he was 6. He learned to play the French horn and to read Braille music in middle school. But his favorite instrument was the guitar which he started learning to play during his Sophomore year in High School. Even as he continued to master the guitar, he also learned how to play other instruments such as the ukulele, guitarlele, mandolin, accordion, and saw. Harley raised money for various cancer foundations since he was 9 years old. Phrases he was known for are "Chick's dig scars." And "Thank you for helping me Kick Cancer's Ass." Harley was a member of the St. Baldrick's Foundation's Knights of the Bald table, having shaved his head more than 7 years to raise money for childhood cancer research. Harley was an ardent advocate for himself and blind people everywhere. He was a devoted member of the National Federation of the Blind (NFB). He became one of the youngest board Members for Texas Association of Blind Students (TABS). Harley was a straight "A" student who mainstreamed in school even though his tumor left him blind. He loved music and sculpting with clay. His sense of humor knew no compare and he read too much. At 18 years old, Henry passed away after his 13 year battle with cancer ended.