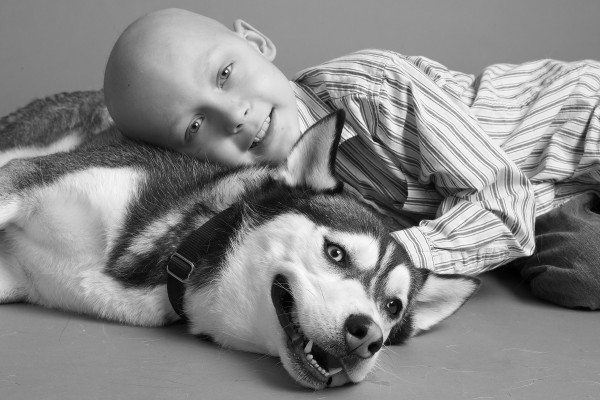 Tyler was diagnosed with stage 4 neuroblastoma Jan. 20th 2004. He had a tumor on his left adrenal gland and also neuroblastoma in his bone and bone marrow. Tyler initially had a biopsy done and then started chemo. Jan. 25th 2004 Tyler had his first round of chemo which was a combination of: vincristine, cyolophosthamide, and doxorubicin he had this combination for rounds 1, 2, 4, and 6 For round 3 and 5 he had: etoposide and cysplatin Tyler had stem cells harvested after his 3rd round of chemo and had a stem cell transplant Aug. 11th 2004. For his stem cell transplant he had: carboplatin, etoposide, and melphalan. Tyler started radiation Oct. 15th 2004 and then started cisretinoic acid shortly there after which he took for 6 months. Tyler was in remission until Nov. 2005 when one of his regular scans showed the neuroblastoma was back. He had went to surgery Dec. 05th 2005 to have a hickman placed and a ct guided biopsy. During the hickman placement his subclavian artery was nicked, he lost about half of his blood and went into cardiac arrest for 4 minutes. He was revived and was put into the picu department . He had to be sedated for 4 days. His doctors could not get a positive bone marrow biopsy until Jan. 2006 at which time he was able to start chemo. Jan. 31st 2006 through Sept. 18 2006 Tyler received topotecan and cytoxan. Oct. 2006 we started going to New York City to Memorial Sloan Kettering Cancer Center to do scans to see if Tyler could qualify for the 3F8 antibody treatment. He was accepted the end of Oct. 2006. Nov. 03rd 2006 Tyler had one round of medium dose chemo in hopes that he would not hama right away when the 3F8 was started. He got vincristine, cytoxan, and topotecan. Tyler had to have one more set of scans in NYC since he had received more chemo since last scans. Scans showed two tiny spots below his right knee. These two spots were hardly lighting up on the scans. End of Nov. 2006 through Feb. 2007 Tyler received the 3F8 antibody treatment in NYC and then in Feb. 2007 Tyler went hama. Scans were redone again after Tyler's hama and they showed he had got significantly worse since the last scan. Feb. 26th 2007 Tyler had 1 round of topotecan and cytoxan. Increase in pain. April 16th 2007 and May 14th 2007 Tyler has 2 rounds of temozolomide and irinotecan. Increase in pain. June 05th 2007 Tyler starts etoposide and cytoxan rotated every 21 days. Increase in pain. Beginning of Aug. 2007 through beginning of Sept. 2007 Tyler does Thalidomine and fenofibrate. Increase in pain. Sept. 19th 2007 Tyler starts ABT-751, this chemo has lots of bad side effects for him and his doctor doesn't think it is helping him. Oct. 19th 2007 we decide to do radiation to make Tyler comfortable and start end of life care. Oct. 29th 2007 we find out that Tyler can get nifurtimox on a compasionate care basis. He will be able to go to Vermont to get this drug the end of Nov. 2007. Now we pray that the nifurtimox will let him have quality life long enough to see a cure! I am updating this all well after all of this. I some how deleted his story sometime in the last month and have just rewrote what I do remember. Through out all of Tyler's treatment he has been in and out of the hospital several times, probably more than I can count with high fevers, being neutropenic, and having line infections. Tyler had a hickman until June 2006 when we talked to his doctor about having a portacath placed so he could enjoy the summer swimming. Thank you to all that have read Tyler's story. He is so special to me and also to many people that he meets. He hands out the biggest hugs and seems to love everyone. Dec. 05 2007 Tyler had one round of cytoxin Jan. 13 2008 Tyler had a head ct scan which showed he has a tumor in his head behind his left eye. Jan. 17 2008 Tyler started Vinblastine and Rapamycin Jan. 21 2008 Tyler had his first dose out of ten of radiation to his head. Feb. 2008 We found out that Tyler has more tumors growing in his head. His kidneys, liver, lungs, and bone marrow have tumor or disese in them. April 09 2008 Tyler passed away peacefully in my arms at home. When he passed he had a smile on his face.