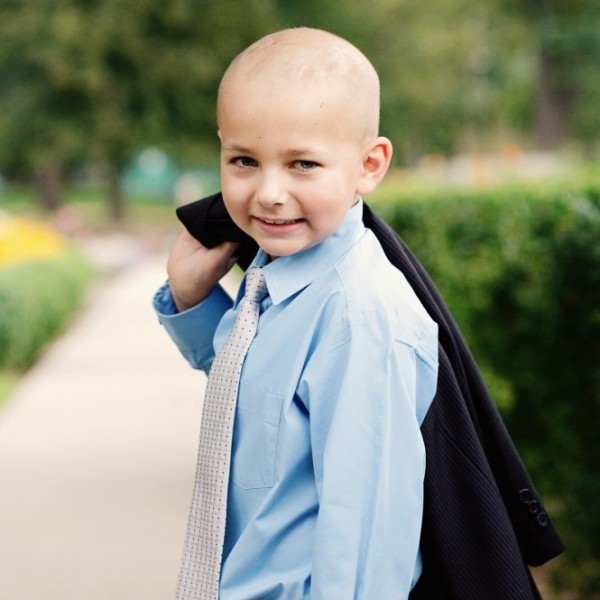 One of five St. Baldrick's Foundation 2012 Ambassador Kids (aka Justin Miller: The Childhood Cancer Fighting Ninja)In 2006, doctors gave Justin a 30% chance of being alive in five years. They said if he relapsed, he wouldn’t survive. Justin proved them wrong. He was only three when he was diagnosed with neuroblastoma. Treatment and surgery took the sight from his left eye, but not his spirit. After his second relapse, Justin started doing pushups, “to get back to fitness so I can fight the cancer again,” he said. In March 2012, Justin relapsed for the fourth time. After finishing MIBG therapy in June 2012, scans showed no signs of cancer in his body. In July of 2013, Justin was cancer free after fighting cancer for the sixth time! Unfortunately, he enjoyed only a few short weeks before scans revealed that the cancer had returned, taking his life on January 21, 2014. But Justin was more than a cancer diagnosis. He loved corn dogs, mac n’ cheese, Cub Scouts, Legos and his dogs – Ralphie and Chipper (after the University of Colorado mascots). While most boys pull on a pair of jeans and a t-shirt, Justin’s first choice was his favorite suit which he said is “smart looking, classy and sophisticated.” Justin became inspired by a blind contestant on a reality show who didn’t let his disability keep him from climbing mountains and jumping off cliffs. Justin did the impossible too. When he learned of his third relapse in October 2011, Justin responded, “I would do anything to make the cancer get out of my body. I will never be too tired to stop fighting – let’s go do this thing.” Through years of fighting cancer, he inspired people around the globe to face their fears and fight with everything they have. He will forever be our ninja.