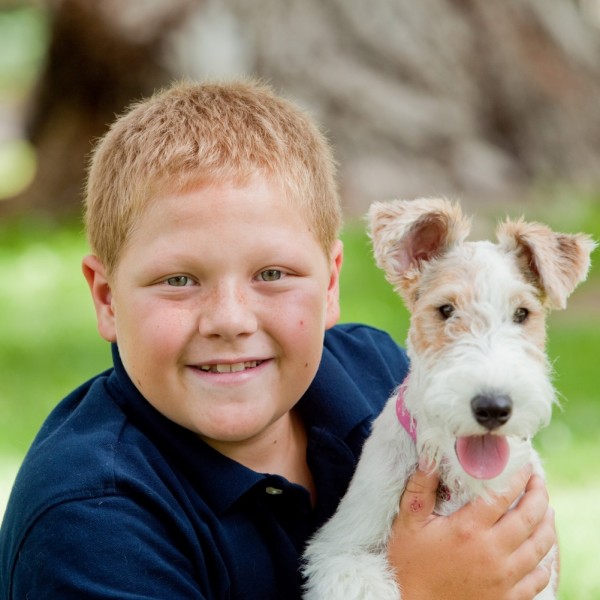 One of five St. Baldrick's Foundation 2011 Ambassador Kids A bike crash may have saved nine-year-old Shaun’s life. Shaun and his twin brother, Justin, were competing in a BMX race when Shaun wrecked his bike, but he hopped right back up and finished the race. “After the race, Shaun became faint so we called an ambulance,” said Shaun’s mother, Stephanie. “He was rushed to the hospital where he had a blood transfusion and a cat scan, and they found spots all over his spleen and liver.” A liver biopsy confirmed the spots were angiosarcoma, an extremely rare cancer that affects both kids and adults. Upon diagnosis, the doctor said, “The good news is that some people with this type of cancer live as long as three years.” That was anything but “good news.” The family’s world fell apart, but they began to do everything they could to try to save their little boy. For two years Shaun underwent chemotherapy and repeated MRI scans, blood tests and urine samples. The first year, the tumors were shrinking; everything was headed in a positive direction. During the next year, little change was seen. After a biopsy showed the lesions to be dead scar tissue, the decision was made to stop the chemotherapy and watch him closely. Shaun is currently considered cancer-free, he returns for scans every four months but the thought that the cancer could return is always there in the back of his mind. This journey has taught his parents the importance of research. “My son had the kind of cancer that no one wants to pay attention to,” said Stephanie. “The doctors could tell us what didn’t work, but couldn’t say for sure what would work. Shaun was treated with brand new drugs that were just approved and saw positive results. He is proof positive that research does work.” Now that hospital stays are behind him, Shaun’s days are filled with attending school, boating, and riding his four-wheeler. “He is fearless and never wants to sit still,” said Stephanie. “His energy can be a bit exhausting at times, but he is living life to the fullest. I look at Shaun and say ‘what a blessing.’” _________ Shaun's story, as written by his family: Shaun is a 7 year old boy who has been diagnosed with a rare cancer called Angiosarcoma. It originated in his spleen, then spread to his liver. Shaun was racing his BMX bike in October of 2007, when he wrecked. After his wreck, he lost consciousness and was rushed to the hospital. They saved his life with a blood transfusion, then performed a CT scan. The scan found a spleen tumor rupture that was bleeding internally. Shaun had his spleen removed and is now receiving chemo for the cancer in his liver. Shaun has a twin brother, Justin. Shaun loves to ride his bike and play outside. Shaun has a large collection of Hot Wheels and enjoys Nascar racing and Monster Trucks. Shaun and his twin brother are now home schooled. For updates on Shaun's condition: WWW.Carepages.com