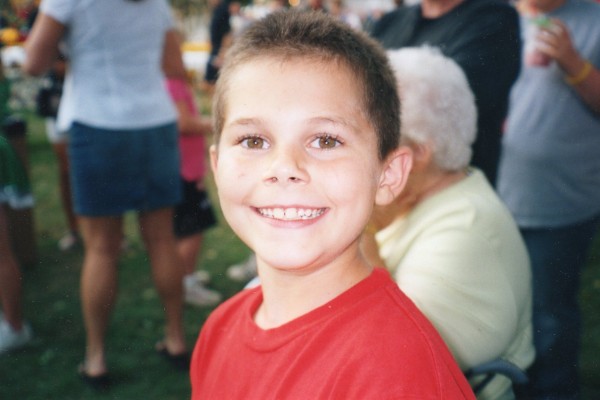 Jacob was diagnosed on March 14,2007 with a glioblastoma or malignant brain tumor. The tumor is located in the thalamic region of his brain. On March 19th Dr. Bartkowski (neurosurgeon) was able to remove approximately 60% of the tumor. After going home Jacob incision didnt seem to be healing and he was not feeling well at all. After a couple of trips back to Akron Childrens Hospital he was admitted and diagnosed with bacterial meningitis and ventriculitis. During his stay he was given numerous antibiotics. After a couple of weeks his neurosurgeon decided to reopen his incision and clean and debris the area. This seemed to help his condition considerably and we started making plans to go home. In the last few days before our release Jacob became increasingly ill. He was vomiting and hard to wake up. He was transferred to PICU and after a CT it was discovered that the cystic sac around his tumor had grown and was blocking the flow of CSF. It became so severe that his pupils dilated and he was completely unresponsive. He was put on a ventilator and given several medications to reduce the fluid and swelling. Then an external drain was put in to drain his spinal fluid. This helped so much! And a couple of days later a VP shunt was put in to drain all of his spinal fluid into his abdomen. We went home the day after the surgery. He was on IV antibiotics for approximately 10 days after he came home but he did not seem to be getting any better. His left side was weak and hard to control. His left eye drifted inward and his hand curled up. When I took him in to have his stitches removed they did a CT scan and discovered the cystic sac around the tumor was still blocking the flow of spinal fluid. So we were admitted again directly to PICU and he had surgery the next day for a shunt revision. The revision did wonders and he regained use of his left hand. Fast forward through the summer.. We went on our Wish trip to Disney World. Jacob began radiation and completed 33 treatments with Temodar. After the radiation we had a month break and did a five day round of Temodar. He didnt really bounce back from that round. A CT at the end of November revealed that the tumor had once again grown. Dr. Bartkowski again did surgery and was able to remove 95% of the tumor. After that surgery Jacob was on many different chemotherapy drugs but none of them could stop that tumor. He went to a wonderful camp for kids with cancer and their siblings that has been a God send. Thank you Camp Quality! But in August we discovered that the tumor had spread into his brain stem and throughout much of his brain. We brought him home and did many wonderful things including going to an OSU football game. In the end he was in mom and dads bed in their arms. He was finally cancer free. We have been blessed with supportive, loving friends, a wonderful community, and a wonderful medical team. We have learned to trust in The Lord, be humble, say thank you, and love with all of our hearts. We have met the most amazing people and read and heard many promising stories. We realize that there is no cure for this type of tumor. In staging terms it is a stage 4. It is rapid growing and very unpredictable. Life expectancy for this type is less than two years. But.. There are survivors out there! Our Lord delivers miracles every day.