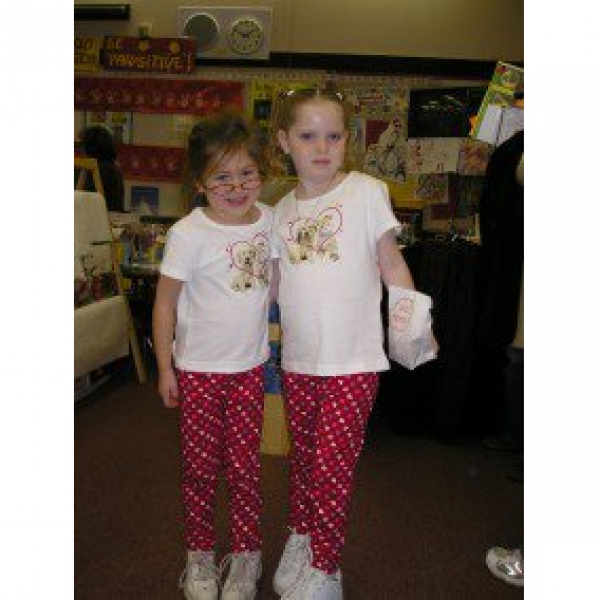 Shelby was my daughter's first and best friend when they showed up for their first day of kindergarten. I still remember her telling me that evening about her new friend, her eyes wide as though Shelby was a gold nugget she found in a stream. It was the kind of moment that makes you wish you had friends like that again. In the picture, my daughter Savannah (on the left) stands with Shelby during her last visit to school. They dressed alike and celebrated 100 days of kindergarten, although Shelby had remained at home since the diagnosis. Savannah was sooo excited to have Shelby in class that she stuck to her side the whole time, just as the picture shows. In December '07, they danced as Sugar Plum Fairies in their kindergarten production of The Nutcracker. They were so happy, dressed in white & blue, running around like ballerinas. It was such an amazing time. After Christmas break, it was noticed that Shelby had trouble holding her pencil and using scissors. At first, they thought she hurt her shoulder after a tumble off the trampoline. A CT scan showed the real problem, though. A tumor had developed at the base of her skull and was affecting her right arm and leg. It was difficult to see this little girl struggle to walk steadily when she was running carefree on stage with my daughter just a few weeks earlier. After surgery at the end of January, a biopsy determined she had an aggressive Level 4 astrocytoma. She struggled through chemo & radiation therapy for several months but was finally allowed, at the age of six, to become my daughter's guardian angel in September 2008. We are proud and honored to have known Shelby, a brave little girl that we always saw smiling & laughing and still continues to inspire those who remember her. To this day, my daughter will speak of Shelby and how much she misses her. In her honor, I will be shaving my head March 4, 2017, at the Roseville Galleria. Thank you for your prayers and donations. ~Allan Berry