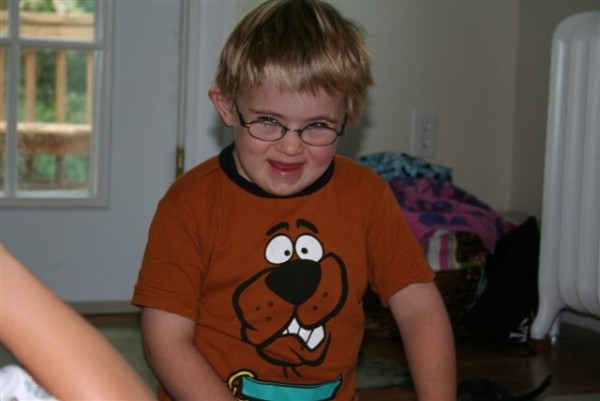 Children's Hospital of Richmond at VCU

Connor is a blond haired, blue-eyed, smart and determined child with Down Syndrome who was originally diagnosed with leukemia and a spinal tumor in April of 2004. After the surgery to remove the tumor, he spent the next six months in and out of the hospital receiving chemotherapy. The surgery damaged his spine, so he also had to learn to used his right hand again as well as walk again. It was amazing that he was able to start school in the fall. He used a little walker and he would speed down the school hallways. He was also determined to climb the playground equipment much to the dismay of his teachers. During the summer of 2006, while on vacation at the beach Connor had trouble walking and we quickly returned home. We found out that his spine was growing crookedly from the prior surgery, crushing his spinal cord. He spent the next months in the hospital recovering from extensive surgery to repair his spine. He handled it all in stride, charming everyone with his sheer determination. He especially loved watching Christmas shows in July, and started his ongoing love for Scooby-Doo. Connor finished his 2 ½ year chemo protocol, in October of 2006. All looked bright, until the summer of 2007. Connor began experiencing significant pain. In August, it was determined that he had relapsed leukemia, along with Central Nervous System (CNS) disease. With his amazing attitude and the support of all the doctors and nurses at MCV, Connor just completed 6 months of intensive chemo, and has had a bone marrow transplant. His nine-year old sister Casey was his donor. Connor has maintained his happy and determined attitude through it all. He loves the hospital, reading, school work, lots of hugs, and of course Scooby-Doo.