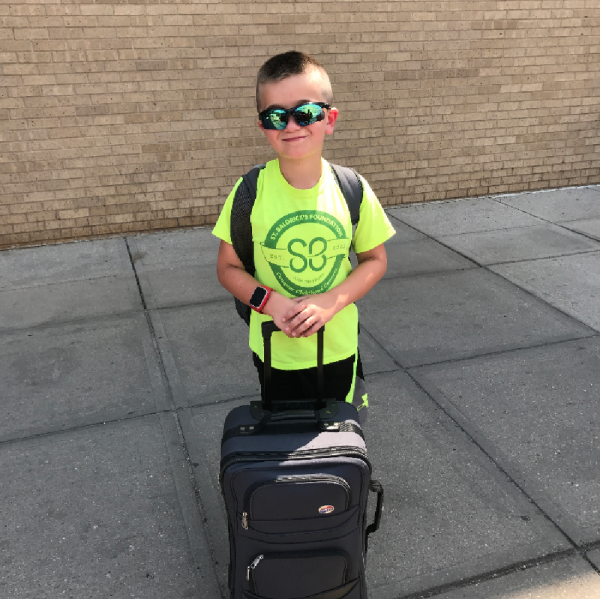 Mickey James is fun, loving, and full of energy. His favorite things to do include going to the beach, playing at the park, and driving anything that moves. He loves legos and superheroes. I am very thankful for everyone's support but most of all I am forever thankful for God's blessings, strength, and knowledge He has given us during this time. James' journey began in August 2010. Ever since James was born, I have been concerned with his left leg being bigger than his right leg. The doctors at Barksdale Air Force Base dismissed my concern, and also they were not concerned with the amount of cafe o' la spots James has on his body. When we moved to Hawaii, I expressed my concern to Hickam's Clinic Staff, and was refered to Tripler Army Medical Center. The Staff here, has treated us with the most kindness and was eager to help us with any concerns we had with James. We were in and out of multible appointments. Here, James was diagnosed with neurofibromatosis (NF). With NF small benign tumors are common so, James needed MRI's, CAT scans, and ultra sounds to make sure his organs such as his kidney's and liver were not related to the larger left leg and to check for any growths he might have inside his body. Upon ultra sound they discovered that James has a large cyst inside of his left kidney. The worse part of his whole journey was when they needed to see if his kidney was functioning properly. They did a test called a VCUG, James was so brave that day becasue he was not sedated and was fully awake when they flushed fluids into his bladder with a catheder and made him use the bathroom right after, while they x-rayed the whole process. Thankfully the test showed James' kidney is working properly and the cyst only needs to be motinored. With the next appointment, Dr. McMan, his urlologist fully examined James and found a small mass next to his left testicle. Hoping the small mass was only neurofiboma, she planned to remove the mass with no complications but explained to us that if the mass was not a neurofiboma she would have to extract the whole left testicle and sperm cord. Dec 2, 2011 the day of his surgery, we were all hopeful, untill Dr. McMan explained to us that the pathologist were unware of what the mass was and she needed to extract the left testicle. The mass was sent off for analysis and in January 2012, James was diagnosed with cancer. James needed another MRI and another surgery to place a port under his skin that goes directly to his heart. This is used for the long term medications James will need for treatment. Despite the harmful side affects of chemotherapy, if you saw him today you would never have guessed how many times he has been poked and how many long days he has spent in the hositpal. I am very greatfull to the staff of Tripler Army Medical Center and Dr. Edwards for helping making the best of this experience for me and my family. Any donations that come in will aid in research so the Medical Staff can give the best care possible to all children who have cancer. Thank you all!