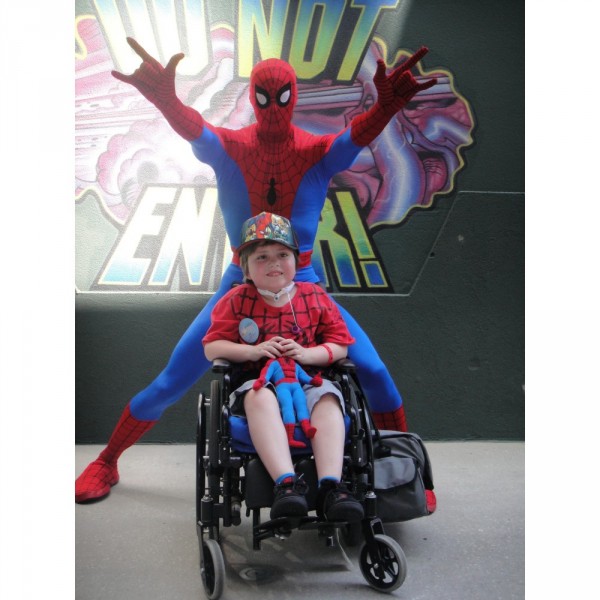 This world lost Micah on August 29th, 2015, and his mom, Elissa, lost her whole world following a long five and a half years of courageous battle against Ependymoma of the brain and spine. Prior to his diagnosis, Micah loved travel, swimming, the beach and soccer and, of course, spending time with his family as well as friends. His wonderful smile, his "sense of tumor" and wit remained with him through his diagnosis, surgeries, treatments and struggle to regain his physical capabilities. Micah inspired many with his "Never Ever Give Up" attitude. He was willing to share his challenges so others would grow and become more accepting of those faced with physical disabilities. Along with his mother Elissa, Micah created a legacy on video for those preparing for a tracheostomy, offering reassurance that life will be "ok" afterwards. He appeared in a video debuted at the Carolina Theater by Chris Rosati's BIGG Challenge: Superheroes in the Hospital. With the love and support from the Duke University Men's Soccer team and coaching staff, Micah's love of soccer blossomed, becoming an official team player and presented with his own jersey. While professing his disdain of school, Micah loved attending school and greatly enjoyed his classmates and friends, teasing his teachers and staff with "eye rolls" and long-running banter year to year. In March Micah was recognized by the Superintendent of the School Board for his determination and perseverance. --- My son is the sweetest, silliest, most empathetic and thoughtful kid I know. He loves Superheroes - especially Spiderman, the beach, pool, concerts, amusement parks, bowling, movies, and most of all he lives to donate to the kids in the hospital. He has asked me on Christmas Eve to bring presents to all of the kids at Duke, so we ran to a store and filled 2 carts worth of presents and distributed them out to all of the patients. He has also collected donations for his Birthday every year as well - donated to Make-A-Wish, and Duke Children's Hospital. He loves to make people laugh and smile! Micah started having headaches late 2009 and being in incredible pain from them and had vomiting spells to go along with it. After several months of taking Micah to the pediatrician weekly from November 2009 - March 2010 (having him allergy tested, inquiring if it could be his appendix or gall bladder - and I was laughed at for even considering those options and told that it wasn't possible, that he's too young for any of those to happen) and the Pediatrician mis-diagnosing Micah for having severe gastritis and being treated with Pepcid. Micah was originally diagnosed on March 7, 2010 by Wake Med with a softball sized brain tumor located in the 4th ventricle and brain stem - they were calling back and forth to UNC and Duke to see which Pediatric Neuro Surgeon would be available to come in during his weekend to treat him - we begged for Duke being big Duke fans and it being March Madness time. Dr. Fuch's at Duke was the first one to call back and let Wake Med know that they needed to place an EVD Drain in Micah's head to relieve the pressure building up from the brain fluid. This was all happening as Micah's motor skills completely stopped due to the pressure. The tumor was partially resected at Duke on March 9, 2010 where we were inpatient until he finished 6 weeks of daily radiation on May 21, 2010. They had to put Micah on a Ventilator for help breathing because he has a central apnea problem which causes him to stop breathing in his sleep - which he is no longer dependant or using the machine since February 2012. He has also had a Shunt surgery to replace the EVD Drain, G-tube, and trach due to the location of the tumor. He was transferred to Pitt County Memorial Hospital in Greenville, NC on May 25, 2010 for rehab for 7 weeks - where he learned how to talk, walk, move his mouth muscles and breathe again. We go to Speech Therapy, Occupational Therapy, and Physical Therapy appointments multiple times weekly since he has been discharged from the hospital. Micah has also been having regular follow-up MRI's and on May 24th, 2012 they found 3 additional tumors - 2 brain and 1 spine. These tumors are inoperable and he will not be able to receive any additional radiation because they are around the same area and it would be cancelled out since he already had such high intensity radiation. He is also using a hearing aid now on his right side as it has caused severe permanent hearing loss for high pitches (which he can no longer get away with not hearing me :) He also has a permanent lazy eye and will require eye surgery, but I'm very nervous about it and I want to make sure that he is having fun just being a kid right now.