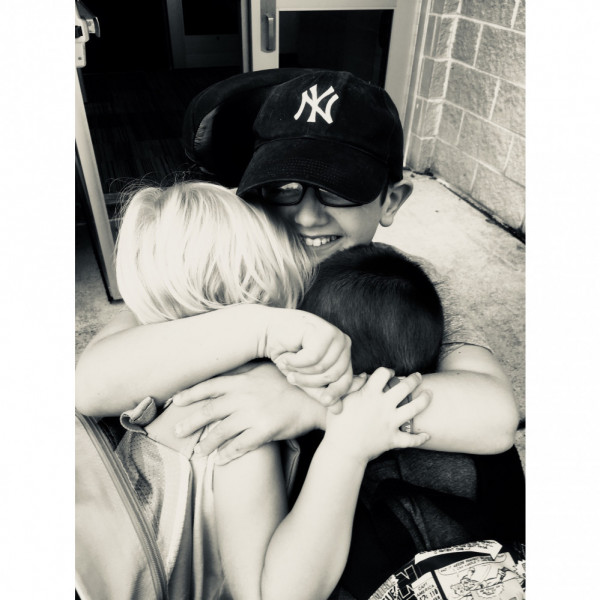 Hello, St. Baldrick's community, Matthew "Johnny-John" Merryman recently turned TEN years old. Matthew is in fourth grad in Frederick County and is such a joy for all! Heives Monster Trucks and family more than anything. He also likes his iPad, going live to a fan club on social media with profound statements about live Ana other silly, random things! He enjoys playing outside, learning math, socializing with his friends at school, having tickle fights, jokes, singing, music, meditation, exercise despite being in a wheelchair, and swimming. Matthew is a brain cancer survivor (papillary tumor of the pineal gland), and has endured eleven brain surgeries, chemotherapy, proton beam radiation therapy, rehabilitation, and many secondary illnesses, and rehabilitation some of which he deals with daily (including thyroid/growth issues, traumatic brain injury, multiple disabilities, vision impairments, and a movement disorder called Dystonia). Matthew continues to be a resilient and positive spirit as well as an inspiration, and a comedian! In 2015, Matthew received Deep Brain Stimulation (DBS), which are two leads placed deep in his brain that run respectively down to a computer in his chest and abdomen.  The results are uncertain as we have not yet seen a big improvement; the hope is that it will help him overcome some of his symptoms of Dystonia and the involuntary muscle contractions that causes. Matthew received acupuncture and physical therapy and has been “treated” by spiritual healers including angel healing and reiki over the past year.... he has received some miracles! Amazing. Believe!!!! Thank you for your involvement with St. Baldrick's, whether a fighter, a family, a friend, a patron..... your support is a blessing. Thank you always to the Jarkiewicz family for their time and energy... again! Love, Matthew & family Frederick, MD