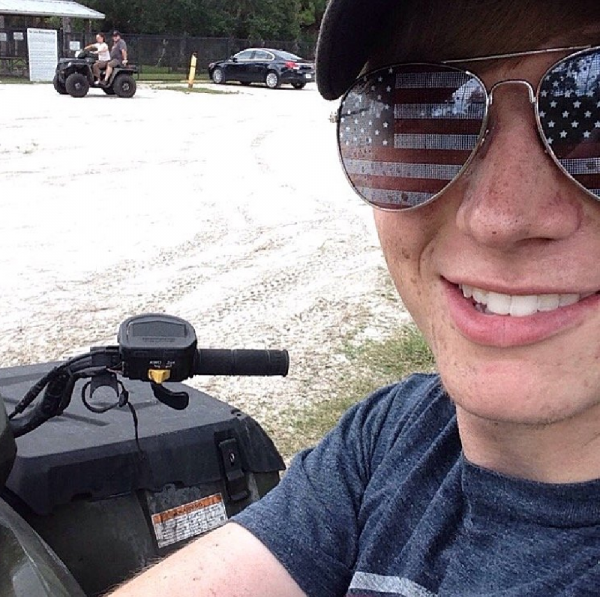 This is Kellen.   AKA, “The Boy”.    He was born in the early hours of the morning during one of February's fiercest storms.  To a backdrop of thunder booms and flashes of lighting, he came into this world like he owned it wearing nothing but his crooked, now signature grin.  Kellen  grew  up a happy child, fully embracing life, and living it with urgency and passion.   In his early days, he enjoyed the ocean, having Nerf Gun fights wars with his big Bro and best friend Murphy, creating Lego masterpieces, sailing on the family boat, and building things (then blowing them up).   A silly kid, he loved making people laugh; yet he had a sweet sensitive heart that went out to anyone hurting.  He wasn't a fan of school or homework, but that kid clearly treasured every second spent with friends.   As a young boy, Kellen enjoyed anything outdoors:  camping, hiking, fishing, running through storms, and shooting BB guns.   As a preteen, he became an ace sharpshooter, a firework display guru, had a passion for driving his ATV's through big mud and cruising at top speed on his boat through the quiet lakes of Winter Park.   Kellen, a "Radical Patriot", had mad respect for our Country and anyone who fought to protect it.  His dream was to serve in the Marines like his Dad.   He graduated high school, won a scholarship for serving the community and was accepted into college.   What he treasured most was working with his Dad as an electrician, driving a giant Chevy truck named "Big Blue",  rough-housing with a pint-sized dog named Sparkles and making a beautiful blonde named Julia, the love of his life, smile.   Kellen also had a beast that lived inside of his head called stinking brain cancer.  Diagnosed at just 10, he fought for 9 years with grace, dignity, and the strength of a thousand men.   Although four recurrences brought more than nine complex brain surgeries, non-stop chemo,  radiation and rehabilitation to relearn to walk; Kellen  beat cancer by how he lived; brave, bold and making the most out of each second fully aware that life is a privilege and every second is a gift.  On the morning of July 27, at just 19 years young, our beautiful, insanely loved Son went to Heaven.   We have no doubt, just like he came into this world; with flashes of lighting and booms of thunder, Kellen stormed the Gates of Heaven at full speed wearing a crooked grin. We still don't know how to live without our Kellen, but we do know it was a privilege and an immense honor to be part of his life. He was so fully loved, and grief, after all is the price we pay for it.    When we think of Kellen's Legacy, we're reminded of  his three favorite sayings that he passionately lived by:  1. "No fear.  Just Faith"2. "If you're walking through hell, keep going", and3, "If you can't help someone, do whatever you can Not to hurt them".   His greatest/fiercest/biggest wish was that no other child would have to walk through hell from the beast called childhood cancer;  and  that we should do whatever we can to stop the hurt that comes with it.  And mostly, The Boy had Faith that someday, when enough good folks join together, there would be a Cure.  To those who join the battle for a world without childhood cancer for Kellen and all the other Children fighting a battle they never chose,  mad love and gratitude for making a difference.  To our big-hearted, long term cancer survivor and  amazing Friend Carla; our greatest Thanks & Love for your passionate advocacy on behalf of every Child, your commitment to finding a Cure, and your endless effort to make Kellen's Wish come true.