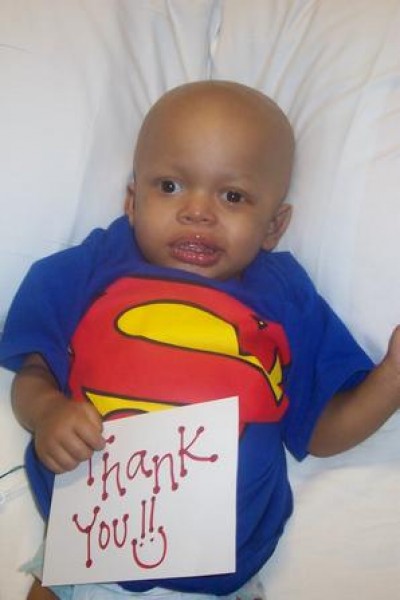 Kaiden Alexander Audette-Burroughs was a loving toddler who developmentally advanced for his age, loved to eat and play with his cousins. At the age of eight months old when he lost interest in his love of food and playing his parents knew something was wrong. After a month of trips to the emergency room and his pediatrician, Kaiden was diagnosed with Medulloblastoma, an aggressive brain tumor. Kaiden went on to received two of his many surgeries including a nine hour surgery to remove the malignant brain tumor in Worcester, Massachusetts at Umass Medical Center. After a quick recovery from surgery Kaiden was discharged before beginning chemotherapy treatment at Boston Children's Hospital and the Dana Farber Cancer Institute's Jimmy Fund Clinic in Boston, MA. During his eight months of inpatient treatment Kaiden was treated via the Jimmy Fund by the loving staff of Boston Children's Hospital on 9 North. As Kaiden who came to be known by everyone as "Superman" progressed through the very difficult chemotherapy regimen he became critically ill but still managed to fight the aggressive tumor that was continuing to spread throughout his spinal column and areas of his brain stem. With such a young child radiation was not an option for treatment, as a result Kaiden's world renowned medical team worked diligently to eradicate enough of the tumor for him to receive a stem cell transplant, which would buy him time to grow and mature so that he could receive radiation when he was older. Unfortunately the aggressive tumor could not be stopped even with the most advanced chemotherapy. Eight months after being diagnosed, on October 27th, 2004 Kaiden who loved watching the Red Sox, and was visited by many of the teams players, was held by his parents and surrounded by family, friends and members of the Boston Police Department, as he was called home to heaven just as the Sox won the World Series just blocks away. Throughout the course of the difficult treatment, Kaiden never gave up and his parents never lost hope. Kaiden's legacy lives on as the angel of the Boston Police Academy class 41-04 of which his father is a proud graduate of. In Kaiden's memory, his mother has gone on to work at Boston Children's Hospital advocating for children with special health needs like Kaiden and also works to raise funds for St. Baldrick's along with the Dana Farber Cancer Institute, Accelerate a Brain Cancer Cure and Camp Sunshine, a retreat for children with life threatening illnesses and their families. "Kaiden had an air of calmness about him that made caring for him a joy, and his big brown eyes looked so deeply into those treating him that for a minute you'd swear that he really did have x-ray vision". - DFCI/Jimmy Fund Pediatric Oncologist "Kaiden accomplished more in 16 months than most people accomplish in a lifetime"- Kaiden's aunt