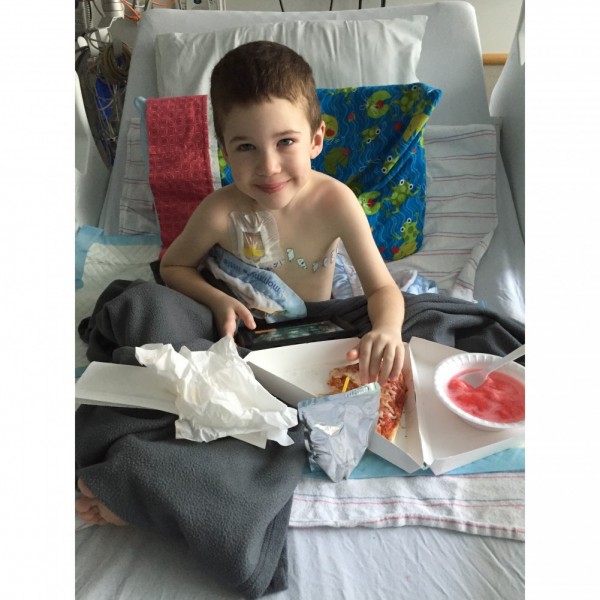 Justin has always had a strong will and a loud voice. As the youngest of three boys, both of those attributes serve him well during the inevitable wrestling matches that occur on a regular basis. Justin initially had symptoms in late November, 2015, the most notable of which was pain and swelling in his feet. After several visits to his pediatrician, we ended up in the emergency room in mid-January, 2016, with a high fever and severe pain. At this point, Justin was not able to walk on his own. That first weekend is a blur of doctors, nurses, and distressing news. Justin was transferred via ambulance from the ER to Children's Hospital of Philadelphia (CHOP). He was admitted to the hospital, and we were told that there were "suspicious" cells in some of his blood work. By Sunday, we were in a conference room being told that Justin had ALL.We spent two weeks in the hospital, during which Justin received intensive chemotherapy, several bone marrow biopsies and numerous other drugs and medicines.The hospital stay was very, very difficult, and Justin changed from being a lively, rambunctious little boy to a shadow of his former self. His legs atrophied even more, while at the same time, he swelled up due to a ravenous appetite, which was a side effect of a high dosage of steroids.By the end of the first month of treatment, by the grace of God and as an answer to many, many prayers, Justin was in remission! He still has a long way to go (another 2.5 years of treatment), but as of March, 2016, he has returned to school on a part-time basis, and although the wrestling matches are not quite as intense as they used to be, his legs are getting stronger every day and he's getting his life back bit by bit.Justin has benefitted from 40-50 years of research, trial and error, the work of countless doctors, nurses and researchers, and the courage of other families to participate in trials and studies to develop treatments for ALL and other childhood cancers. Without all of that history, Justin's prognosis would not be as hopeful and positive as it is today.