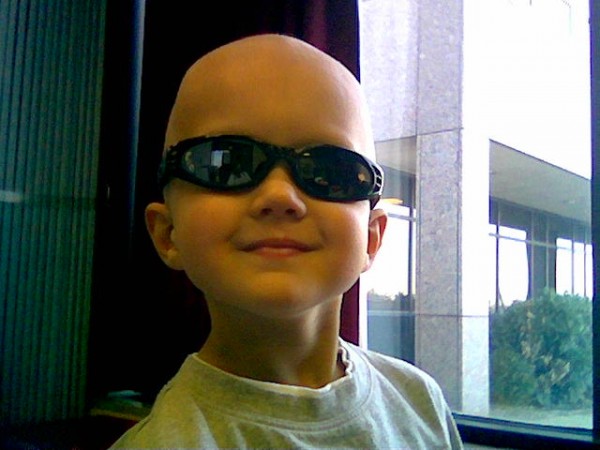 Summer of 2006 we realized that Jonah started complaining that his ankle hurt. We didn't think much of it at first, but noticed that it was always his right ankle. It looked swollen, so we took him to the doctor. Jonah's primary doctor x-rayed it and wasn't sure exactly what was wrong, so he referred us to an orthopaedic doctor. A PA told us that Jonah had a cyst in his bone and that it would eventually reabsorb. "Come back in 3-4 years if it's still a problem". He casted him for a hairline fracture under the cyst and told us to come back in 4 weeks. After Jonah got the cast off he was still in a lot of pain and walking worse, so we got a second opinion. The next doctor ordered a MRI and agreed that it was just a cyst..."never cancerous". However he referred us to OKC to a pediatric orthopedic surgeon, to look at his ankle and possibly remove the cyst so that it wouldn't hurt his growth. She said that the surgery would take about an hour and he would be casted for only two weeks. No big deal. November 13th, 2006 is a day we will never forget. Jonah had his surgery scheduled to remove the cyst that four doctors said they were 99.9% sure it was benign. You can imagine our shock and horror when the doctor came in saying words like malignant, aggressive chemotherapy, and amputation. It was soon confirmed that Jonah had Osteosarcoma, a bone tumor, in his right fibula near his ankle. Soon after we were thrown into the world of hospitals, medicines and a life that revolved around helping our little boy fight for his leg, but more importantly, his life. Jonah started chemotherapy rounds in December, 2006. Each round took about a month and includes being in the hospital 3-5 days a week with only about a week off. Usually on our "week off" we were back in the hospital because of side effects of the chemo like mouthsores or fevers caused by low blood counts. After the third round it was evident that we weren't going to be able to save Jonah's foot. If we did he would have a life full of surgeries, a fused ankle, limited mobility and a 60% risk of the cancer coming back. The doctors convinced us he would be more functional with a prosthetic. Jonah had his amputation surgery on 4/26/07 in Little Rock, AR. The biopsy of his foot came back that the chemotherapy had been effective in killing the tumor, meaning that it is looking good for the cancer not returning. Jonah continued chemo for 3 more rounds to assure that everything was killed. We had a big 'No More Chemo' party when Jonah finished chemo on 9/15/07. Jonah was fitted for his first "new leg" on 6/20/07. He chose 1/2 Blue's Clues and 1/2 Diego for this leg. Jonah's first leg never fit correctly so he was fitted with a new prosthetic on 10/28/07 and began to make a lot of progress. It was also 1/2 Diego and 1/2 Blues Clues, just different patterns. The second leg was long and Jonah had to wear a lift on his other foot to make up the difference. We decided to go to Shriners Hospital in Louisiana for a third leg, hoping it would be the best yet. In April, 2008 Jonah recieved his third leg with a space theme this time, with stars and planets. Unfortunately, it also was too long, however we combined parts from the second and third leg and fixed the length problem. Shriners was able to make a few adjustments and Jonah was walking great. Jonah received his fifth prosthetic in March, 2010. He has continued to make progress. Now when he has pants on, you can't even tell he has a prosthetic, however he loves wearing shorts and showing it off :) We are hoping to get him involved in the Endeavor Games this year. Jonah has been cancer free since treatment ended 9/15/07. During treatment he had his bad days and his good days, but I think the good always out numbered the bad. He is a sweet little boy who has over come more in the last few years than most of us will in a lifetime. We look forward to seeing how God is going to use what Jonah has been through in his life.