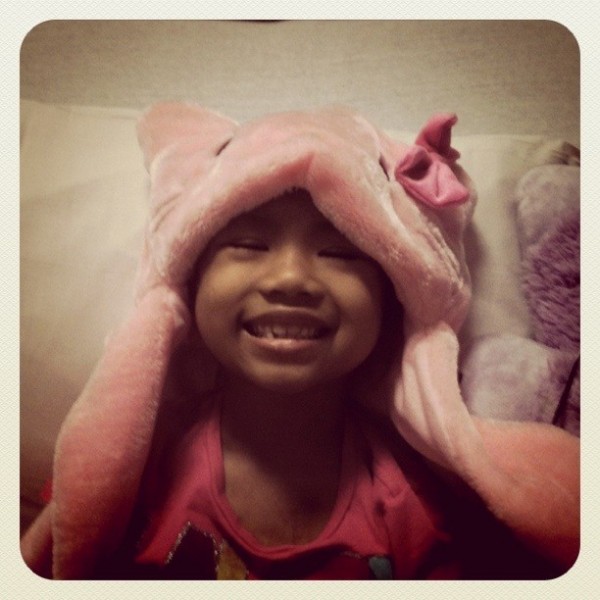 Starting April of last year, Jaysha has been suffering from severe headaches that lead to vomiting. She would be okay for about a week or two and then the symptoms would occur again. Throughout the year we've been sending her to the emergency room. There were no answers. Until the beginning of September when she was in school she was having another episode of headaches and vomiting. They called me to pick her up and she told us she couldn't feel or move her legs. We rushed her to the hospital when I noticed that she couldn't say words clearly. They admitted her into ICU. They gave her a full body CT scan and noticed something was not normal near her brain and spine. They knew the cause was not a virus or bacteria. They did an LP which they took samples of her cerebral fluid and saw abnormal cells. They knew it was cancer but they didn't have enough abnormal cells to determine what type of cancer she has. She was in the hospital for about two weeks and within those two weeks her symptoms got worse. The doctors would have to do an LP to drain her cerebral fluld every three days because the cancer cells blocks her bodies ability to absorb the fluid itself. This was the reason why she was suffering from headaches. She had too much pressure building up and the fluid was not being absorbed. Once she was feeling better the sent her home but would have to go back to the hospital to have the doctors drain the fluid every other day. On Oct. 3, we took her to the hospital for her routine LP and she was fine. We went home and a couple of hours later the doctor called me up and told us they finally have a diagnosis. Jaysha has Medullablastoma. Right after I got off the phone with the doctor she was suffering from headaches which led to a seisure. We called the ambulance and rushed her to the hospital where the admitted her and did two LPs one in the ER and one in the ICU. They ended up doing an emergncy procedure to have a shunt placed so they could re- route the cerebral fluid to her abdomen where the fluid can be absorbed. Now that she had a dignosis she able to start treatment. It took the Doctors a month to diagnose her. They had to consult with other doctors they are associated with in other states. Test after test they didn't have enough cancer cells to determine what type of cancer she had. What makes Jaysha's case unique is that she doesn't have a tumor. She just has the cancer cells. They chose not to do biopsy because the location of the cancer cells were in crutial parts of her body, her brain and her spine. Within that month her condition worsen and the cancer cells have increased. Thats when they had enough samples to determine what type of cancer she had. She has had four weeks of radition and has gone through four chemo treatments. Besides the shunt she has had a feeding tube placed and a port so they can easily draw blood samples and give her chemo. This was a very long journey for her to finally get the treatment she needed. Jaysha still has a few more chemos to go but is in very high spirits. Her cousin was recently diagnosed with leukemia. She has shared her story and used herself as an example to help him cope with his condition. I am so proud of her! Thank you for supporting me and the more than 300,000 kids worldwide who will be diagnosed with cancer this year. By sharing the gifts of your time, talent and money with the St. Baldrick’s Foundation, you're supporting research to give all kids with cancer a better chance for a cure