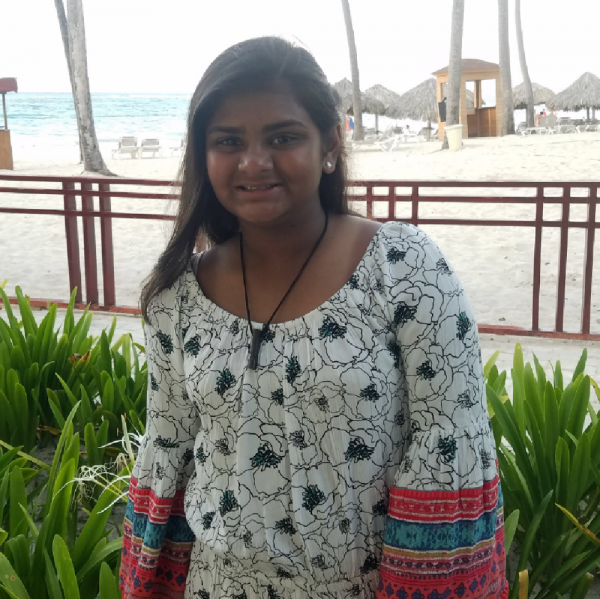 Diya is a vibrant 12 year old who is in the 7th grade. She enjoys school and learns more and more every day. She is a sweet & sassy girl who loves playing outside & going to the beach. She enjoys soccer, playing the guitar and Tae Kwon Do. She has followed her brother's foot steps in achieving a black belt in TKD. She also loves playing classic rock songs on her guitar, particularly Red Hot Chili Pepper songs! Her favorite foods include steak, hamburgers & pizza.

Diya was diagnosed in 2009 at age 3 with AML, and endured 3 rounds of chemotherapy. Her older brother, Jai, 5 at the time, was a 100% match to be her bone marrow donor. She had a bone marrow transplant on February 4, 2010, and is currently consideres cancer free. Her strong will, determination, strength, and courage gave us, her parents, the courage to fight this with her every day. On December 20, 2009, I asked her if I could shave her head, since it had fallen out in patches. She and I made a big deal about it, saying it was going to be a "new haircut." She agreed and I did it. It was cleansing in a sense for us, but she amazed me that day with her strength and excitement! We felt if she could do this, so could we. She sailed through the treatments with a smile. She was NOT going to let this thing beat her, she was going to beat it! Here we are 9 years later after her transplant, and she is doing GREAT! She still has no signs of leukemia and all her cells are 100% donor cells!!! Without Jai donating his marrow to his sister we would not have been able to see her grow into the beautiful, caring independent young woman that she has become! It's because of him, her great team of doctors and foundations like St. Baldrick's that she is happy & healthy today!