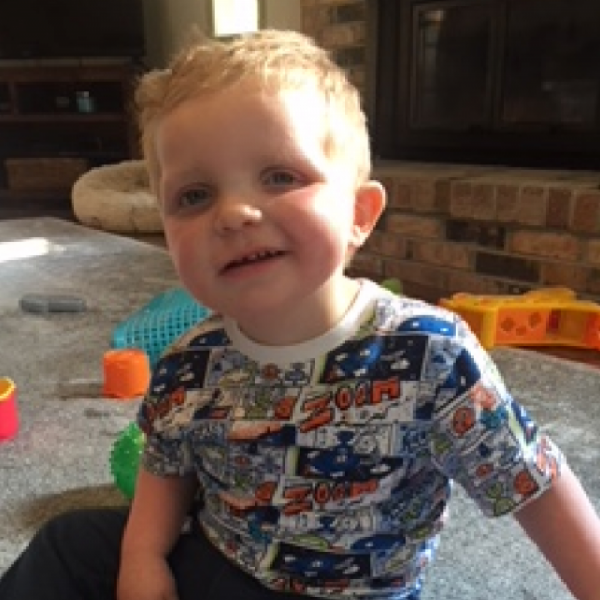 Cameron was a normal, happy, active ten month old until he stopped using his right arm nearly overnight. We took him to the emergency room at Children's Hospital Colorado on January 30, 2016, where they did a CT scan and an MRI and found a very large mass in the left side of his brain. The biopsy results came back that Cam had an atypical (type 2) meningioma which is common in adults but very, very rare in babies. On February 17, 2016, Cam underwent a fifteen hour surgery to remove the mass from his brain. The surgery was very difficult and tedious, Cam required a blood transfusion and he also suffered a stroke. In the end, nearly ⅔ of the mass was still remaining and he had almost no function in his right arm and leg.

Next, we tried three different types of chemotherapy, which did not work, two more brain surgeries that merely bought us time, and genetic tests, which did not produce any new options. His tumor continued to grow at a very fast rate.

Our last chance was radiation, but in a child as young as Cam, the late effects (learning disabilities, cognitive and endocrine dysfunction, blood vessel damage) were very serious. After a lot of research and meeting with several doctors, we decided to take him to Massachusetts General Hospital for proton radiation, intended to spare the healthy parts of his brain.

After two months in Boston and 34 treatments of proton radiation, Cameron came home with a shiny bald head and infantile spasms, a specific type of seizure disorder that was treated with high doses of corticosteroids.

Unfortunately, the medical treatment for his epilepsy was only temporary and in June 2017, Cam had his fifth brain surgery, a hemispherectomy in which the surgeon removed or permanently separated the left half of his brain.

Since then, Cam has been making strides. He has been learning new words and using his arm and leg more and more. He is on hormone supplements because he has since developed diabetes insipidus, hypoadrenocorticism (Addison's disease), and has a growth hormone deficiency. He also has an inability to control his body temperature and absolutely no thirst reflex (solved by a tube into his stomach).

His current battle is chronic respiratory disease, brought on by weak muscles in his neck and throat, so that he can't protect his airway. He aspirates so much that his lungs are always inflamed. Diagnosed with severe sleep apnea for the same reason, he's been on a biPAP machine, which has apparently contributed to his nasal sinuses becoming completely obstructed. He will be getting nasal surgery very soon, which we are hopeful will help him get some much-needed sleep and catch up with his peers someday. We all see how badly he wants to run and play and yell with his Kindergarten buddies!

Over four years past the end of radiation, Cameron's tumor is tiny and stable. We continue to monitor it with MRI's every 6 months while he fights the complications of his treatments. Every day's a new day, and he's shown amazing strength and determination, no matter what's thrown at him. He's got a long way to go, but we know he can beat this!