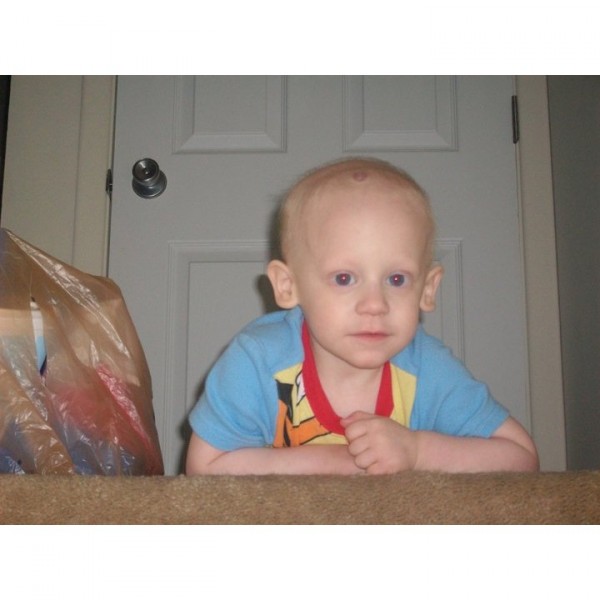 Cameron is very bright and bubbly. He loves to play outside with his bike, on the playground, and loves the beach. He can charm anyone, and has the biggest blue eyes! He also loves Tom and Jerry cartoons and penguins! He doesn't like to sit and not be active. He likes company, and has alot of friends! Cameron was only 20 months old, just my baby, when we noticed his stomach was very large, and he was vomiting and losing weight, pale, anemic. We took him into the pediatrician several times, but always told a virus. On June 16, 2010 he woke up from a nap with his fingers and toes blue from where the tumor had been pushing on his aorta that leads to his heart. Rushed him into the pediatrician and they said to go to he hospital to get a CT scan...this would be the day we would find it, the rare tumor (hepatoblastoma) that would change our lives forever. Cameron's tumor was the size of the grapefruit, his tumor marker (AFP) was 950,000, he had a biopsy of the tumor, confirmed malignancy, then had a central line place for chemotherapy. Cameron would go through 6 cycles of chemotherapy, mouth sores, weight loss, feeding tube, hair loss, and just so sick. After the 4th cycle the tumor has shrank, AFP is coming down!! We are sent to Cincinnati Children's Hospital a hundred miles from our home for a liver transplant evaluation, Cameron's tumor was right in the middle of the liver, surgeons cannot remove it without a transplant. He is on the donor list, we waited for the call for his life-saving transplant for 2 months, got the call in December of 2010. Camerons' transplant went well, we stayed in the hospital for 6 weeks, and at the Ronald McDonald House for 2 weeks, over Christmas and into the New Year. He has been hospitalized 7 times since his transplant although, for infections, PTLD- a rare life threatening disease after transplant, and PCP pneumonia that almost took him from us just 3 months ago. He has been through more than anyone could imagine, and he has hearing loss, and major scars as battle wounds. But he wakes up every day with a love for life, even though life has been so cruel to him. He loves to dance, play outside, cars, trucks and most of all trains! HE IS MY HERO!!!!! THANK YOU ALL FOR SUPPORTING HIM!!