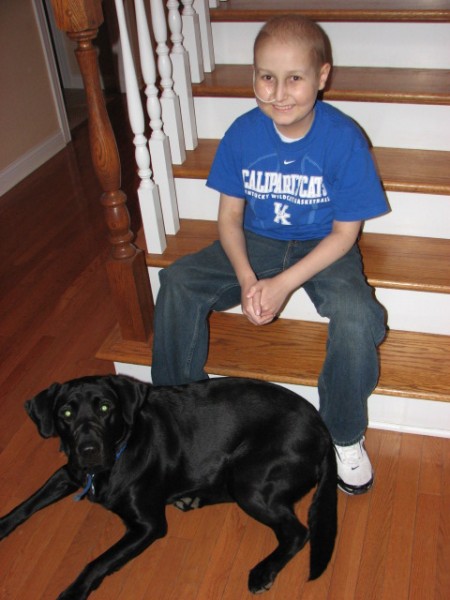 Where do I start to tell you about Bradley? Brad is an energetic, smart, social, spiritual young man who just loves life. He's a straight A student in the 8th grade at Christian Academy of Louisville.​ He plays football, trains in jiu jitsu, reads avidly and loves the outdoors. Brad made it to the national spelling bee for ACSI (Associatio​n of Christian Schools Internation​al) in Washington DC as a 6th grader. He plays the trombone. He’s a crack shot with a rifle. He is thoughtful and kind and he loves God. He has been a leader among his peers in school and at church. Brad is funny and loves a good laugh. He loves his family. He's a great son, a great brother and a loyal friend. Bradley turned 13 on August 12, 2009 with a great deal of enthusiasm about becoming a teenager. Over the following couple of weeks, he was practicing football, starting school and he even went on his first rock-climbing trip. In late August, Brad took a hit in football practice and spent the week in unusually high pain. During that week, he also developed a low-grade fever (off and on) that his pediatrician believed was viral. On Saturday, August 29, 2009, we rushed Bradley to Kosair Children's Hospital when it became clear that something more was wrong. By the time we got to the ER, Brad was already deep in septic shock from a staph infection that was racing unchecked through his body. We later learned that his immune system was basically non-existent because he had leukemia. After 2 1/2 weeks in intensive care and another 2 1/2 months at Kosair Hospital's oncology wing, we came home for Thanksgiving. Since then, Brad has continued to recover from the septic shock and to fight the leukemia. Bradley is finishing up his chemo protocol in March/April 2010 and preparing to move on to chemo maintenance for the next 3 years. We are very thankful that he is in remission. While we still have a way to go, we look forward to getting him back to school as a high school freshman this fall.