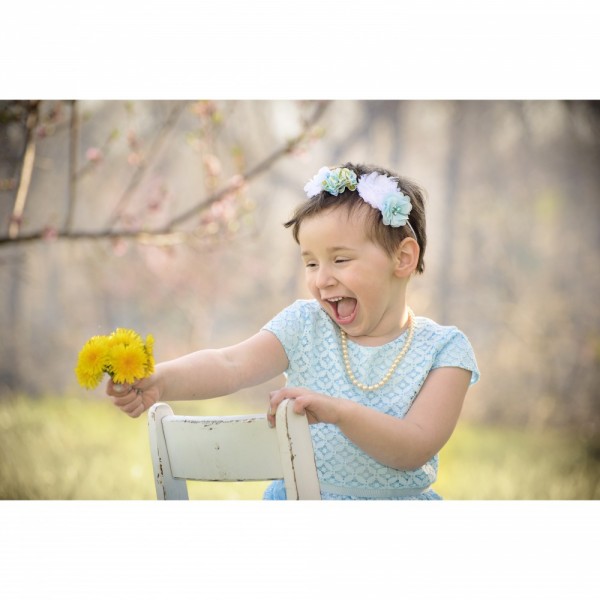 Thank you for supporting me and the more than 300,000 kids worldwide who will be diagnosed with cancer this year. By sharing the gifts of your time, talent and money with the St. Baldrick’s Foundation, you're supporting research to give all kids with cancer a better chance for a cure. The months leading up to Trinity's diagnosis were so hard. She had back pain and random fevers and eventually got to the point where she struggled to pick herself up off of the couch. We took her to her pediatrician three times and our local emergency department three times in two months, to no avail. Each time, they would say she must have fallen or she just had a virus. Desperate for answers, we drove an hour and a half to Nationwide Children's Hospital on July 13, 2013. After multiple tests and questions, we heard the sentence that violently flipped our world upside down, every parent's worst nightmare - "We found a mass and believe it is cancer." That sentence is so hard to comprehend, even for an adult being diagnosed. Hearing it about my sweet, innocent 2 year old daughter was indescribable. I know the doctor who told us kept talking after that sentence, but I can't tell you a single word she said. She endured a tumor resection from her abdomen, 6 rounds of chemotherapy, 1 round of high dose chemotherapy followed by a bone marrow transplant, 12 rounds of sedated radiation, and 6 rounds of excruciatingly painful immunotherapy, as well as many other procedures and bumps in the road, before we finally heard those three magic words: No Evidence of Disease. The next six months were pure bliss! We went on her Make A Wish trip to Disney and had the time of our lives, took her swimming for the first time, and soaked up every second. And then, the "normal" that we had just started to get used to was pulled from under our feet when we found out after her routine 6 month scans (June 2015) that the cancer was back, in her arm this time. She smiled through 12 more rounds of sedated radiation and 3 rounds of chemotherapy when when we found out that she was once again NED. We were over the moon, but a little more leery. We had her enrolled in a trial that seemed promising to hopefully keep her cancer free this time. We adjusted once again to a new normal, that included taking 4 pills a day by mouth. It never phased her. She was thriving and happy and finally looked as healthy as she acted! On April 1, 2016, once again at her 6 month post treatment scans, we found out that the beast known as neuroblastoma had once again returned, this time spread all throughout her body. The doctors didn't give us much hope to grab onto and called in the palliative care team. They told us that she would NEVER be cancer free again, that they would treat to keep her comfortable and to soak up the time that we had. We were, of course, completely devastated. Fast forward two months and two rounds of chemotherapy with antibodies - on June 3rd, we got news that we never expected. Those two rounds had completely cleared her body of any visible cancer cells! The doctors were stunned and we were utterly ecstatic! She endured two more rounds before developing a terrible allergic reaction to one of the drugs used in her therapy, which leads us to where we are now. (7/9/16) She has scans during the upcoming week to make sure that she is still NED. If her scans are clear, we will have a consultation in New York to enroll her in a vaccine trial, with hopes of keeping the cancer out of her precious little body for good. They say third time is a charm, and we hope with everything in us that that saying holds true for us. Trinity is a strong, vibrant, compassionate little girl. She rolls with the punches unlike anybody I have ever seen. And even when she does get knocked down, she gets right back up, stronger than ever. She is our dandelion. Trinity passed peacefully at home om the arms of her mother with family close by on July 22, 2018, after a 5 year valiant fight against cancer.