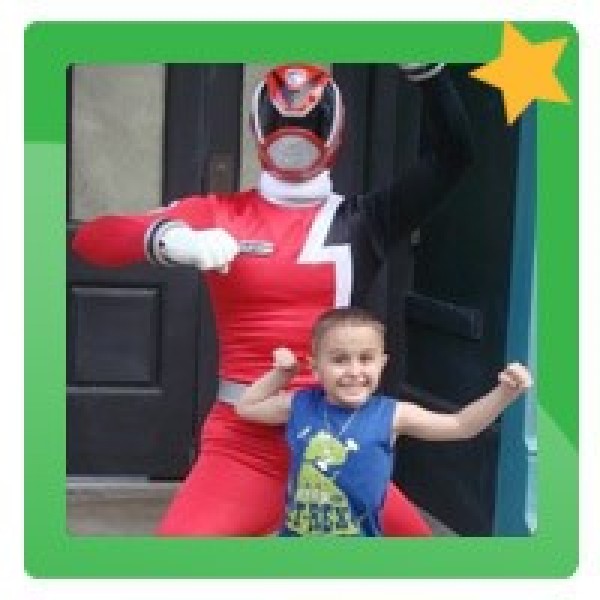 Thank you for supporting me and the more than 300,000 kids worldwide who will be diagnosed with cancer this year. By sharing the gifts of your time, talent and money with the St. Baldrick’s Foundation They say that heroes come in all shapes and sizes. Being 3'6" and weighing in at only 37 pounds may not sound like your average size for a super hero, but for those who knew Dominic Osorio, aka “The Dominator", he was everything a hero should be and more. Shortly after his 5th birthday, 10/17/07, Dominic was diagnosed with a low grade Glioma. The initial surgery two weeks later removed 80% of the tumor and he began chemotherapy during May 2008. During that time, Dominic was just as playful and happy as he had ever been. He did not let his weekly chemo treatments and the occasional sickness hold him back. He didn't even seem to notice when his dark, coarse, curly brown hair turned light, thin and blonde. Even with a catheter port implanted into his chest to gain easier access for his medicine treatments, he had no problem running around with his shirt off. Dominic continued chemo until November 2008, when it became necessary for a second emergency surgery. The tumor had grown significantly and was now diagnosed as a higher grade 3. Immediately after surgery, Dominic was transferred to Kennedy Krieger to undergo intense physical therapy, as this surgery had left him partially paralyzed on his right side. Dominic had to relearn how to walk, talk and even use the bathroom again. In addition, the doctors needed to continue their aggressive treatments and Dominic had to undergo radiation therapy 5 times a week for 6 weeks. Each treatment would require Dominic to be placed under anesthesia. Dominic's mother and nurses at Kennedy Krieger agreed that the daily anesthesia dose could hinder his progress in physical therapy and asked his doctors if it was possible for Dominic to simply lie still for each of the 10 minute procedures. The doctors informed them that it's extremely difficult for a child to lie still for any length of time much less the 10 minutes as most adults are unable to do so themselves. Knowing how important it was for Dominic to be able to continue his physical therapy, Dominic's mother & nurses came up with a plan to teach Dominic how to lie completely still while under going the radiation treatments . They only had 3 weeks to get him ready. If they were not able to do this, then they would have no choice but to place Dominic under anesthesia. Like most young boys, Dominic loved super heroes. So much so that Dominic's grandmother had given him the nickname, “The Dominator" on her daily visits to help him with his therapy. Dominic's mother and nurses made a comic book starring a super hero character named “The Dominator". In the story, the little boy was able to turn into “The Dominator" and defeat the evil megazoid in his head by lying completely still in a huge rotating radiation chamber that shot out bright red laser beams. Everyday Dominic's mother and nurses would practice with him. At first, Dominic was only able to lie still for 2 minutes, but by the end of the three week deadline, he was able to lie perfectly still for the whole 10 minutes. Needless to say, the doctors were impressed! Dominic completed his radiation & more chemo treatments through February 2009. Life after the second surgery was still very different for Dominic now that he was partially paralyzed on his right side. Every day tasks, such as using a fork & drinking out of a straw, now posed a challenge for him. Although he could no longer tie his shoes, ride his bike or even play his beloved video games, Dominic always had a smile on his face. He did not once complain or ask “why me?" He didn't like things, he now loved them. They weren't great, they were the greatest. And even as he was walking into the radiation chamber, when asked how he was doing, he would give his signature thumbs up and a big smile. His courage and strength was an inspiration to people of all ages. Then in June 2009, an MRI showed that even with the doctors' aggressive treatments, the tumor had grown yet again. Dominic was put on steroids and “Mr. Bones", as he would often call himself, had started to put on weight. The steroids had caused him to gain substantial amounts of weight. Instead of the normal energetic little boy, he was now very tired and sleepy. Over the next couple of weeks, he lost his ability to walk and eventually he could no longer even sit up by himself. Even worse, his high pitched, raspy voice was now replaced with silence. Then on September 17, 2009 he slipped into a coma. He was comatose until he earned his angel wings at age 7 on November 13, 2009. In his memory, the D.O. Believe Foundation has been started. The foundation is dedicated to raising awareness and funds for pediatric cancer research because it is so desperately needed. Cancer is the leading cause of death by disease among US children. In fact, every 4 hours a child will die from pediatric cancer. Yet only 3% of the National Cancer Institute's budget goes towards finding a cure for our children. There is no known cause for cancer. No one knows why some children get cancer and why some don't. We do know that research is the only way to find a cure. It is the only hope for the 40,000+ children currently fighting this battle. The D.O. Believe Foundation is in this fight because every child battling cancer deserves a fighting chance. Every dollar counts and every dollar makes a difference. Together we CAN put an END to children's cancer. All we have to D.O is Believe.upporting research to give all kids with cancer a better chance for a cure. Dominic "The Dominator Osorio"