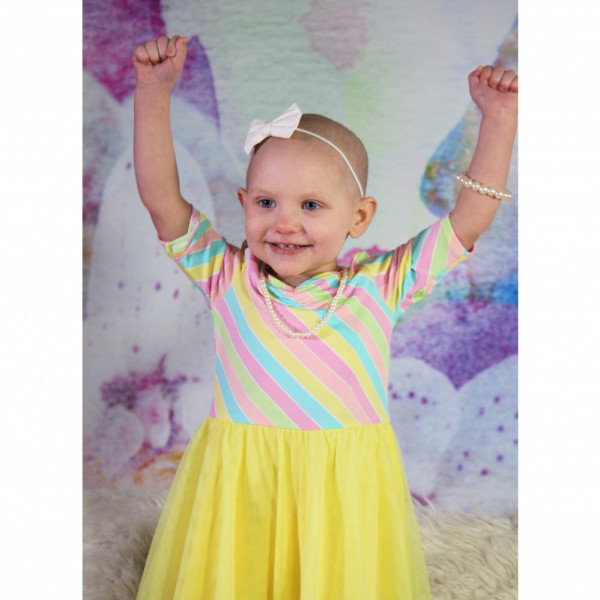 How it all started: When I was 7 months pregnant I went in for a normal check up at my Ob-gyn. I told her some of things I had been feeling so she wanted a quick ultrasound to check my fluid level. That ultrasound was not quick and the tech was taking a lot of pictures. In that moment I knew something was wrong with my baby girl, and I knew I was right when we were asked to sit and wait to talk to the doctor. As I sit in that waiting room for what seemed like hours, crying, holding my son wondering all of the things that could be wrong and praying that my baby, his little sister was ok.  One thing that did not at all cross my mind was being told that my unborn daughter had a large mass in her abdomen. I was then referred to a local high risk doctor, who then referred and sent me to a high risk team almost 2 hours from home. The next 2 months were long with weekly ultrasounds and check ups. I cried daily not knowing what would happen, wondering if she was ok and wondering what we’d find out after she was born since they couldn’t tell us waiting until she was born and tests were done.  On my birthday, 2 hours from home I delivered a strong, fearless little warrior. Nora was born via c-section and went directly to the NICU. She was hooked up to IV nutrition until she had ultrasounds and some other testing done. Within a couple days she was with me out of the NICU. Those tests had shown the mass was on her adrenal gland and her urine tests required further testing. We met with the pediatric oncology team and scheduled her first MIBG scan and scheduled surgery to remove the tumor and biopsy it. Nora had surgery at 2 months old and was officially diagnosed with stage 4s neuroblastoma shortly after. Our lives changed forever in that moment.  They had said stage 4s can spread to the bone marrow, her liver, and skin, but most of the time it goes away on its own. We would do monthly ultrasounds, labs and random MRIs to monitor and make sure that was the case. They were right it had spread to her liver and bone marrow, the her liver spots went away and the cells in her bone marrow were slowly going away. We went to every other month appointments and we’re going to space them out even farther around 15 months. It was nerve wrecking to not watch it so closely but I believed it was going away, she had been doing so amazing all along. Unfortunately she didn’t reach NED. When Nora was 18 months old just playing like any other day with her brother, not acting any different I noticed the right side of her face started to drop. By the evening her right side had paralysis and wouldn’t move. After going to our ER at home, we were transferred to where our oncology team was and later told Nora had relapsed. She was then re diagnosed with stage 4 high risk neuroblastoma and started treatment within a couple weeks. So far her treatment has consisted of 6 rounds of chemo, 2 stem cell transplants, 18 days of radiation, and is currently in the middle of immunotherapy. Hoping after immunotherapy her scans say she has no evidence of disease