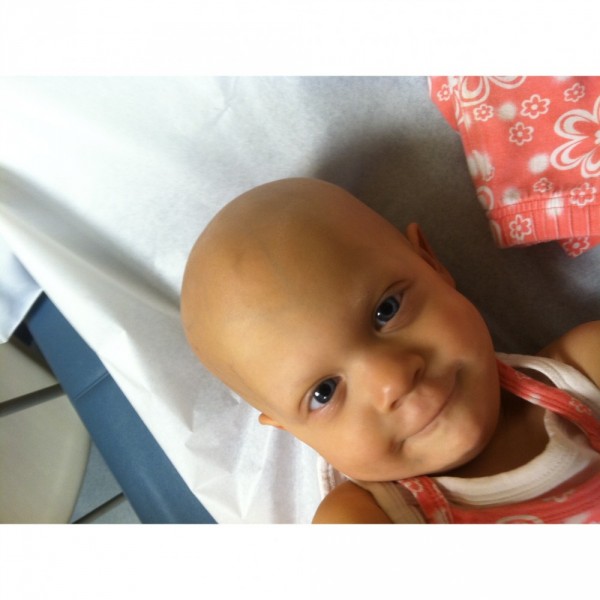 I’m Kezia, and for my family, 2011 was the year of cancer. In January, I was diagnosed with stage 3 Hodgkin’s Lymphoma. My daughter, Saoirse, was 7-months-old. I was faced with multiple tests, scans, hospital visits, and chemotherapy. I was forced to wean my nursing child, and began the first of twelve rounds of chemotherapy. We were determined to go on with our lives as normally as possible, and keep Saoirse a happy little girl. May 5th, that all changed. Saoirse had been acting strangely, and two black eyes and some strange lumps on her head, sent us to her doctor. After three weeks of seeing multiple doctors, Saoirse’s pediatrician sent us for an emergency CT. That night we were told she had Neuroblastoma; our 11-month-old baby had cancer. We battled together, many times receiving the same drugs. We were doing great, and things were looking up. By September, we were both in remission. But just two weeks later, Saoirse’s Neuroblastoma came back, and worse than ever. It stopped responding to treatment, and although we tried everything we could, it took her life on December 13th. Cancer took our life in more ways than one. But now we are fighting against it, and have created the Fitzgerald Cancer Fund to help stop Neuroblastoma in its tracks. Your support for St Baldrick's means that more children can be free of this terrible disease. Neuroblastoma is a know killer, and even families who's children respond to treatment and are declared cancer free, always have to worry that it will come back. Neuroblastoma attacks babies - babies who have their whole life ahead of them, and who will have to spend their whole lives as cancer patients. It's not over when the cancer is "gone." Your support shows these families that there is hope, and that someone cares about their child. Thank you for your support.