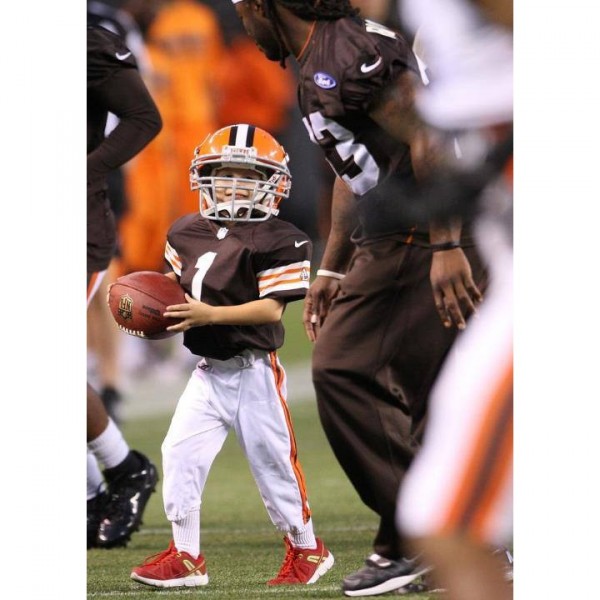 Three year old Ryan Encinas' journey began with a simple runny nose that lasted about two months. It was fall 2010 and there were many likely explanations: he had just started preschool and his mom, dad, & baby sister kept passing around colds as well. Even after many doctor visits and attempted medicines, nothing seemed to help. The doctor was beginning to think it was allergies and wanted him to see a specialist. Then on Halloween weekend his breathing changed, his color drained and he became lethargic. His mom took him to the ER thinking it was pneumonia. Everyone was shocked at what they discovered. A football-sized tumor on his left lung filled his chest cavity, completely collapsing his left lung, crowding his heart into his right lung, and bending his trachea. The skilled team of doctors and nurses acted quickly to drain chest fluid, do biopsies, and put him on a ventilator to assist his breathing. He was admitted to the PICU at Akron Children's where he remained for nearly 8 weeks. The pathology report rushed back less than a week later, and in that time the tumor grew a little more. We needed a diagnosis quickly in order to start chemo and try to stop the progression of this extremely aggressive and fast growing tumor. The docs guessed it probably grew to that size in about 6-8 weeks. The initial diagnosis was non-rhabdomyosarcoma. His oncologist was not convinced and sent out tissue samples to experts around the country. In the meantime, he received his first dose of chemo on Nov. 8th, 2010, just 8 days after being admitted. A few days later he received a new diagnosis from the experts at Children's Hospitals and Clinic of Minnesota. It was declared to be stage 2 & 3 Pleuro Pulmonary Blastoma, an extremely rare pediatric cancer. His chemo was adjusted slightly and radiation was avoided. He began his new course of treatment the following week and so began his 41 week treatment journey. He received chemo every 3 weeks, running for 24-72hrs straight. He spent a total of 54 days in the PICU, most of which was on a ventilator. He had a feeding tube in his nose and even had a tracheotomy. Things looked very, very grim in the beginning and he experienced so many side effects from the drugs. But he had a miraculous turn around. His trach was removed Dec 17th, 2010 and he relearned, very quickly, how to talk again. He was well enough to come home on Dec. 23, 2010, just in time to spend Christmas with his family. On January 14th, 2011 he underwent his first surgery to remove the tumor along with the lower lobe of his left lung. His feeding tube was removed in January after he had relearned how to eat and intake enough calories. He had to relearn how to walk, and run, and jump as well and underwent months of physical therapy. On April 6th, 2010, he had a second surgery to remove the margin of the lung from the first surgery and a small node on his diaphragm. We wanted to be sure we got it all out. And the pathology reports confirmed there was no more cancer! He continued treatment getting stronger and stronger each time. He eventually suffered little to no side effects with each chemo treatment. His last dose of chemo completed on August 6th at 6PM. Last Scans - 9/29/2014 - ALL CLEAR - NED Diagnosis: Pluero Pulmonary Blastoma Treatment: 36 week course of Chemotherapy (finally done) and possibly Radiation (none needed in Ryan's case) followed by removal of the tumor if it has shrunk enough (removed successfully in Jan. & Apr. '10) Initial Prognosis: If no metatstis 40-50%, considerably less if it has spread