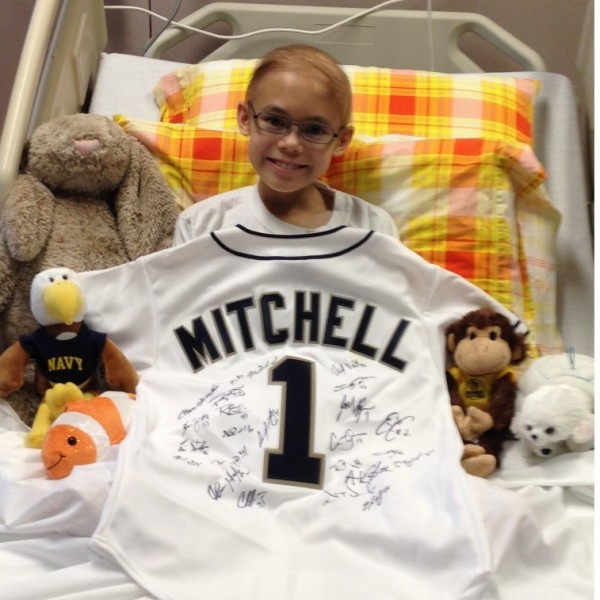 Inspiring! Amazing! Proud! The superlatives surrounding Mitchell and all kids with cancer are endless!Mitchell's journey toward recovery began with the first obvious symptoms on 27 December 2013 while on the last day of a ski trip. He had a severe pain in his head followed by vomiting. Within one week, he had two more episodes, with the third resulting in a trip to the emergency room on 3 January 2014. Result - Brain Tumor. Devestating is the word that is used, probably, by all parents in that situation. Mitchell cried a bit, but not too much as he didn't really understand. Neither did dad, for that matter. The plan was for surgery to remove the tumor five days later, which resulted in a full resection. The tumor was not attached to the brain, so that was a positive sign. Over the next 10 months, Mitchell endured 33 days of Proton Therapy (boy were we lucky that Mitchell was able to get Proton therapy at one of eight locations in the United States that was less than 10 miles from home! He then began six months of chemotherapy which ended in October 2014. Again, think of those superlatives. The way he endured that treatment was incredible!Today, Mitchell is in remission and undergoing MRIs every three months to ensure of no recurrence of the tumor. If you saw him, you would only know that he is a kid who has undergone such a difficult time by the baseball size bald spot on his head. The area where he had focused radiation still has not sprouted new hair. That's ok with him. Except for constand rubbing of an itchy head, he doesn't care one iota for the bald spot! While he had to stop competing in Taekwondo sparring (he was a national champion in 2012), he has moved on to taking tennis lessons and is learning to shoot competitively in Olympic style shooting.Mitchell, at first didn't want to get the attention to his condition, but as soon as we explained he could help other kids and help raise money to find a cure, he hasn't looked back. On Mitchell's behalf, we all thank you for your support and your donations to this great charity!