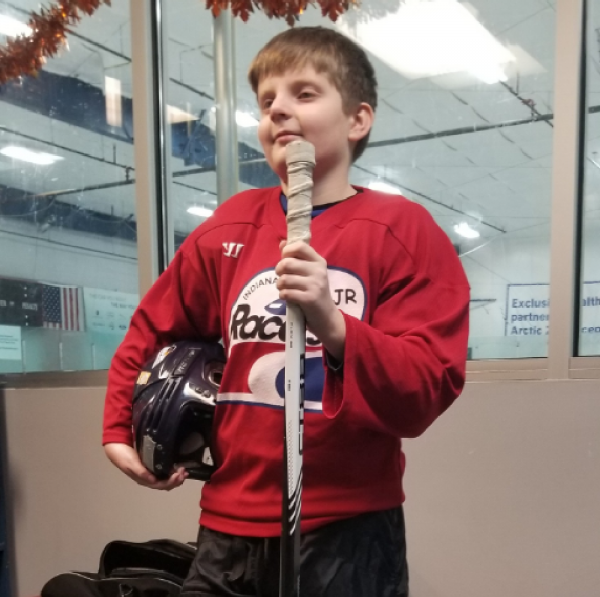 Matthias appears to be a pretty typical kid. He takes classes in piano and jiu jitsu. He is learning to play hockey, and he is a huge fan of our local team, the Indy Fuel. He likes playing NHL on XBox, and he endlessly pesters his older brother. He loves playing with his friends. He is a good student at school. He is obsessed with extreme weather and wants to work for the National Weather Service someday. He's not a typical kid, though. He's actually pretty incredible. Matthias does all of these things without being able to see. He lost both of his eyes to cancer when he was a baby.

Matthias was diagnosed with bilateral retinoblastoma (cancer in both eyes) at 3 ½ months old. He endured six months of chemotherapy, monthly laser- and cryo-therapies, and Exams Under Anesthesia. Near the end of treatment, his main tumors started growing again and there were innumerable seed tumors. Both of his eyes were surgically removed before his first birthday. He has remained cancer-free since 2009.

Matthias has dealt with cancer and its effects for his entire life. At just ten-years-old, he is a long-term cancer survivor. His cancer was caused by a genetic mutation that increases his risk of cancer throughout his lifetime, and he continues to be monitored by physicians. This means his life is randomly interrupted by tests and scans whenever something seems abnormal.

Recognizing the challenges of all children and families dealing with cancer, Matthias has become a warrior in the fight against cancer. He served as one of five St. Baldrick's Ambassadors in 2013 and shaved his head for the first time. He shaved again in 2014, 2015, 2016, and 2017. He traveled to Washington, DC in 2017 and 2018 to help advocate for the STAR Act by speaking with Indiana legislators. He plans to shave his head again in 2019.