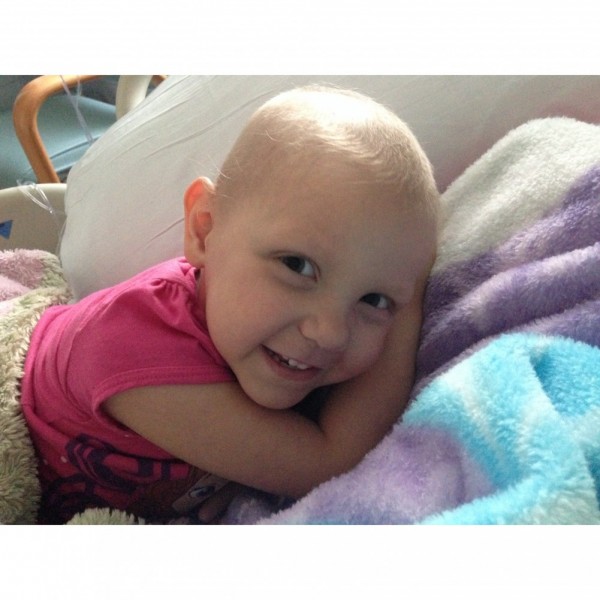 Margo Miller began her courageous battle with leukemia in June of 2012, when she was just 21 months old, and was in treatment consistently for the next 921 days until (3 months after her 4th birthday) her little body could take no more. On New Year's Eve, 12/31/14, Princess Margo gained her angel wings. With her original diagnosis in 2012, Margo had 1 year of extensive chemotherapy and then began what was supposed to be 2 years of lower dose, "maintenance" chemo. Unfortunately, on January 27, 2014 (only 19 months and 2 days from her original diagnosis), her leukemia returned. Margo once again put on her Princess Warrior boots and began kicking cancer's butt!! Or at least she tried. Leukemia is normally highly curable, but because Margo's disease relapsed "early" while she was still in treatment from her original diagnosis (which is rare), Margo needed a bone marrow transplant once she was in remission. Unfortunately we were never able to get Margo into her second remission. After only 1 month of standard treatment in St Louis, Margo’s leukemia proved what we feared... her leukemia was resistant to chemotherapy. She continued the path of standard treatment, but that would only cover her for 3 cycles or approximately 5 months. Her parents and doctors began searching for clinical trials. The family first traveled to Philadelphia for their highly publicized and very promising immunotherapy Tcell trial, but Margo's cells failed "test expansion". Margo then traveled to Memorial Sloan Kettering Cancer Center in New York City, to pursue the same Tcell treatment which is one of the most innovative and cutting edge treatments to surface in years. There, while waiting for her own Tcells to be re-engineered, she received their clofarabine based induction chemotherapy treatment (which also failed to reduce her disease burden). In August, Margo's successfully re-engineered and expanded Tcells were given back to her, but also failed to make an impact on her refractory leukemia. While still in NYC, Margo survived a dangerous central line infection mid-August, then fought through CMV through late-August and into September, having nearly lost her battle a couple of times when her lungs became overcome with leukemia... but she kept recovering! Margo finally qualified for another clinical trial. On September 23, 2014, she began a Phase 1 trial immunotherapy called SGN-CD19A. After that failed to make any change in Margo's disease burden, she started another highly promising immunotherapy trial (Phase 2) called Moxetumomab. That started November 14 and after 3 weeks also proved unable to tackle Margo's leukemia. By mid-December, after 6 straight months inpatient in NY (183 nights), Margo's doctors sadly informed her family that they were out of treatment options. Nothing had even slightly worked and her little body had been full of leukemia since June. Her organs were full of disease and she was in no condition to pursue anything more aggressive. Margo was moved via air ambulance on Friday December 19, from NY back to her home hospital in St Louis. The Make-A-Wish organization expedited a magical evening for Margo on December 23rd, with a Princess Tea Party, a ride in a pink limo and a horse drawn princess carriage ride through a Christmas light-filled park. On Christmas Eve Margo was moved home to be with her family, where she enjoyed an amazing Christmas Day. She spent the following week with family and friends until she left us to be in heaven on December 31, 2014. You can read the first year of Margo's journey on Caring Bridge (visit: babyMargaret), but Margo's 2014 journey, pictures and now memories are on her Facebook page: www.facebook/curemargo