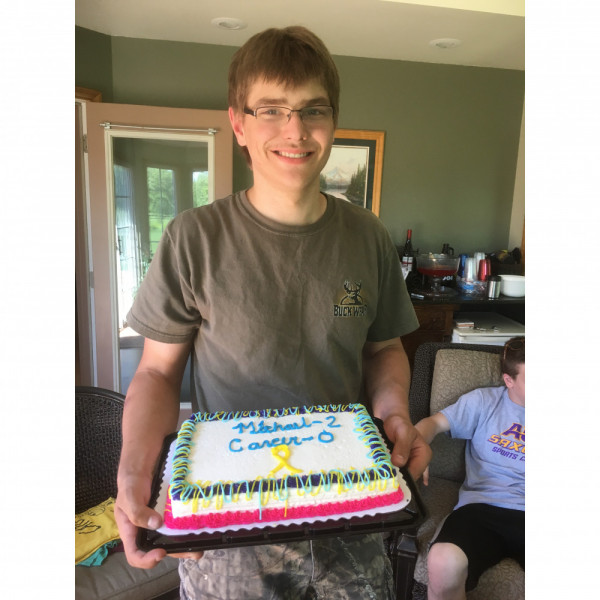 When I was 7 years old, my mom discovered a strange lump on my leg.  Nearly ten months, several doctors and tests later, we finally had it removed; and in January 2007 I was diagnosed with Ewing’s Sarcoma.  Ewing’s is an aggressive bone cancer found in children.  My tumor was outside the bone, which our doctor said they only see in 1% of all Ewing’s cases.  That is equivalent to 1 in 10 million people!  However, for a Ewing’s tumor to have been dormant for ten months, Dr. McGrath said he had never heard of a documented case like it, ever.  I was a walking miracle.  I underwent several surgeries, and 42 weeks of intense chemotherapy.  I had to be in the hospital for all my treatments, so my parents and I spent a lot of time away from home.  It was not only hard on my body, it was hard on our entire family.  But I knew that God had a plan, and that there must be a reason he wanted me at Roswell Park Cancer Institute.  I made many close friends there.  Tragically, many of them didn’t survive their fight.  It is for them that I have been a St. Baldrick’s shavee five times and have helped to raise nearly $10,000 for research.  Little did I know then, that I would benefit from that research, once again. On June 1st, 2016, as I was getting ready for school just prior to my high school graduation, I felt a lump on the back of my leg that had not been there the day before.  On June 7th, the biopsy results showed that my cancer had returned after 9 ½ years.  I had to repeat a few rounds of the same chemotherapy I had endured over ten years before, but because of the prior treatments, I was maxed out on those drugs.  Thanks to research, there was a promising new outpatient treatment that I was able to undergo.  I started my freshman year at Clarkson University two weeks late, due to my radiation schedule; and had to attend classes feeling extremely nauseous and in pain.  But thanks to my team of doctors, and to my professors, I completed both my freshman year of Electrical Engineering and my cancer treatment in June 2017!  I am so grateful to organizations like St. Baldrick’s Foundation who recognize that 4% of the federal cancer research budget is not enough funding to save the lives of kids like me; and for people like you who are willing to support this critical research!  Without it, I would not be alive today, so THANK YOU!!