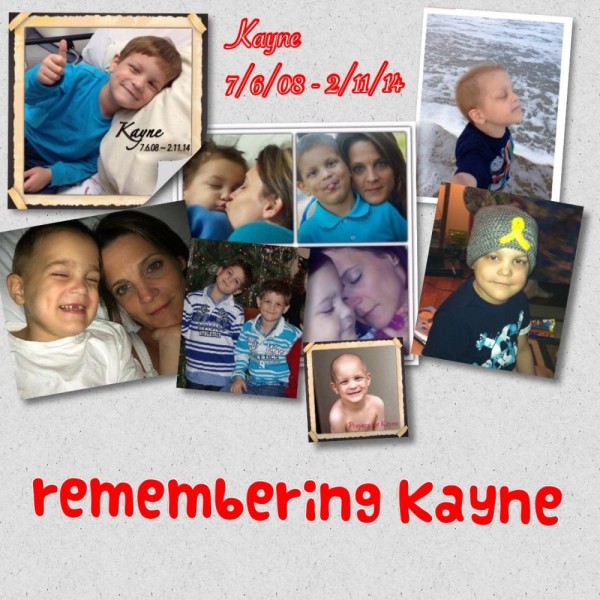 ~Aaron Kayne Warters ~ 7/6/08 - 2/11/14 "a hero, an inspiration, an angel in heaven, and proof that miracles do happen." •Kayne's story through his mothers eyes• Miracle # 1: Kayne was born a fighter on July 6, 2008 weighing only two pounds and six ounces. His twin, Ashton, weighed even less at one pound and 13 ounces. They were premature being born at 28 weeks gestation. Miracle number one. Even after being so premature, he was perfectly normal with no permanent premature complications. A few months after birth, Kayne was diagnosed with cancer and no chance to live. Miracle # 2: after a second opinion, Kayne was diagnosed with Infantile Hemangioendothelioma of the liver and NOT cancer. After years of continued growth of the "hemangiomas", he was referred to Cincinnati Children's Hospital from North Caroina Children's Hospital for treatment. It is extremely rare, but the possibility was there that they could be "transforming" to a deadly cancer known as Angiosarcoma. As of October 2012, Kayne was beginning the process for a liver transplant. A lung biopsy was needed to rule out cancer. The biopsy showed metastatic Angiosarcoma and he began his fight October 12, 2012. Miracle #3: the cancer was taking over his liver after treatment failed. He was put on palliative/comfort care. We then decided to try an experimental chemotherapy regimen. Kayne suffered immensely from a lung obstruction from the huge tumors. Kayne briefly left this earth but God gave us the greatest Christmas miracle. He pulled through amazing all of his doctors and was able to live 14 months we never thought we would have. To go from COMFORT CARE WITH NO CHANCE OF SURVIVAL to his normal sweet self in a few months is the greatest miracle that I have ever witnessed. In July of 2013, Kayne's cancer returned in his liver. We were out out of treatment options, but he became the first pediatric patient to try Mekinist, which targeted his genetic mutation. This gave us a few more precious months with our hero. He earned his wings, peacefully, February 11, 2014 surrounded by family and friends. Although his life was always full of needles, surgeries, procedures, and scans, he always had a smile on his face that infected everyone's heart and soul with pure joy. He showed me a love greater than I could have every imagined and he knew I loved him just as much. His short five years on earth taught me what it was to truly love and be loved, that miracles do happen, and to never give up. Thank you Kayne, for showing me what it feels like to truly live.