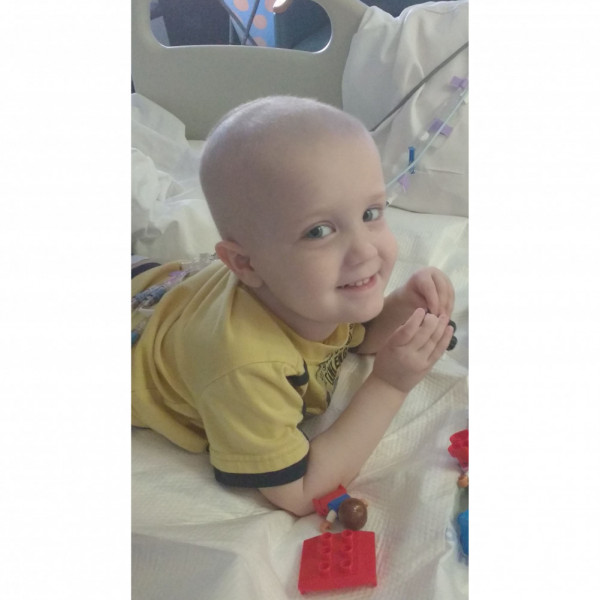 Joel was the sweetest 3-year old boy who gave the best hugs. He loved to laugh. In almost every picture we have of Joel you can see the twinkle in his eye. Yes, he was a typical mischevious boy. Before cancer he loved to make a mess with his food at the table or play in the mud. His favorite foods were chocolate cupcakes with sprinkles, pbj, pizza, and macaroni and cheese. His best friends were his identical twin brother Seth and his older brother Nathaniel. They loved to spend their days playing with Lego, Transformers, any kind of cars, construction vehicles and dinosaurs. Joel was diagnosed with low platelets at the same time as his twin brother in the summer of 2016. In November of 2016 his twin brother Seth was hospitalized and diagnosed with a rare form of AML. Doctors raced to find out what was wrong with both boys and discover what genetic problems might be occurring. Several months later, in March of 2017, a bone marrow biopsy revealed that Joel also had AML. Joel underwent 2 rounds of chemo and a bone marrow transplant. Probably the most difficult part of our journey was the constant separation of family. AML requires month-long hospital stays at a time (or longer) because the chemo is so devastating to the body. For almost a year, either Seth or Joel was hospitalized most of the time and we only enjoyed a few weeks where everyone was home together. More research could discover new treatments that aren’t so toxic to children and don’t require long hospital stays. Joel always smiled through the pain. He would stand on the hospital bed pretending to be a giraffe eating leaves, making all of the doctors laugh. Even during dressing changes and procedures that Joel didn’t like, he might cry very briefly and then say with his classic smile “That wasn’t so bad.” His bravery and lack of complaining was an example to everyone. As long as he had Mom or Dad to cuddle with in his hospital bed and his iPad, he was happy, despite the relentless pain. So much more research is needed for AML, especially in the relapsed and refractory setting. Joel’s relapse occurred in August 2017, less than 2 months after his bone marrow transplant. He was only able to try one more round of chemo before the cancer took over his body. Surrounded by his loving family on November 1, 2017 he left this earth for a much better home in heaven. Please support Joel and St. Balderick’s so that other families don’t have to say goodbye too soon.