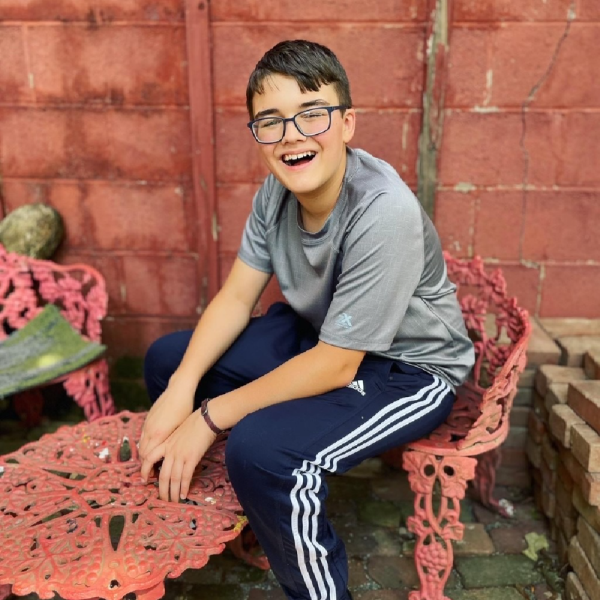 May 21, 2014. My parents were flying in to help celebrate both Jaden's and my upcoming birthdays. We went to the airport to pick them up and Jaden started limping. Like any parent of a crazy, dramatic four year old would, we assumed he was just tired and thought maybe he needed a nap. We put him to bed early, in hopes that he would be in a better mood the next day.

May 22, 2014. Jaden woke up from a long night of sleep and refused to stand up. He complained of knee pain in his left knee and would scream if anyone tried to touch it. We finally got him calmed down enough to let us examine it. We found a hard knot on the back of his knee. We decided to take him to get it checked out, and eventually we were sent to Akron Children's ER. When we got to the ER at Children's, there was a team of specialists waiting to examine Jaden. Other than the swollen lymph nodes, Jaden had no symptoms. Jaden has always had a way of going against the norm, and in true Jaden fashion, he had all the doctors stumped. They admitted us to the hospital to investigate further. The next day, Jaden's knee was pain free and he still had no other symptoms. We stayed for the next four days while they ran countless tests and tried to find a cause. They finally decided to do a needle aspiration biopsy on the lymph node in his knee. They thought for sure it had to be either an infection or cancer. The preliminary read on the biopsy came back negative for both. Our hospital visit was over a holiday, so the final test results were a bit delayed. They sent us home and said that someone would call us with the final results of the biopsy, but they were 99.9% sure it was not cancer and that Jaden was probably fine. "Probably fine"...I remember hearing those words a lot when we were in the hospital. At the time they seemed comforting.

May 28, 2014. I was at work when my phone rang with a number that I assumed to be the hospital calling me to schedule a follow up appointment to discuss the results of the biopsy. I soon realized what little meaning the words "probably fine" held.  I answered it, and on the other end was the man that would come to be Jaden's pediatric oncologist. We now know him as "Dr. Dan", and he has become a part of our family, in a way. Over the next week, we learned the specifics of Jaden's diagnosis of stage 2 B-Cell Lymphoblastic Lymphoma. We learned that treatment would last for over 2.5 years. We learned about many long-term side effects that are caused by the chemotherapy that would also save our son's life. Over the next year and a half, we would learn what it was like to spend the majority of time at or admitted to a hospital. We would learn that childhood cancer is a reality for way too many kids, and that it is vicious. It steals our kids' childhood and far too often, it steals our kids' lives. We would learn that research is severely underfunded. We would learn that if we want to have hope for a cure for our kids, we would need to fight for it. We would need *you* to fight for it with us.  August 18, 2016. Jaden's treatment plan was officially completed! We threw the biggest party and family and friends came from near and far to help us celebrate. Even though he is now off treatment, there are years of scans and blood tests to get through before he will be deemed a 'survivor' by the medical community. We still deal with the effects of exposing his body to toxic chemicals for nearly three years. Our kids deserve better treatment than the outdated drugs that are currently being used. Research has proven that there are much better treatment options out there for our kids, and that funding is critical to continue pursuing these alternative treatment options.

February 8, 2021. This year will mark five years since Jaden ended treatment, and seven years since his initial diagnosis. We received his diagnosis on May 28, 2014. We decided to change that day into something good this year and on May 28, 2020 we took Jaden to get his hair cut off so he could donate it to Wigs for Kids. He never wants to be bald again, so instead of shaving at St. Baldrick's we told him he could grow it really long and donate it instead. Pictures are below!

We still deal with secondary medical issues caused by his treatments. We see Dr. Dan only once a year now. We continue to fight for other kids and their family members who are going through what our family went through when Jaden was diagnosed/actively being treated. He is wrapping up 7th grade in a few short months, and there isn't a day that goes by that I don't consider how privileged we are that he is still here and we get to watch him grow up. Thanks for taking the time to read Jaden's story. We ask that you consider supporting St. Baldrick's in Jaden's honor. You can support St. Baldrick's by helping to spread awareness for what kids like Jaden go through, volunteering your time, or donating.