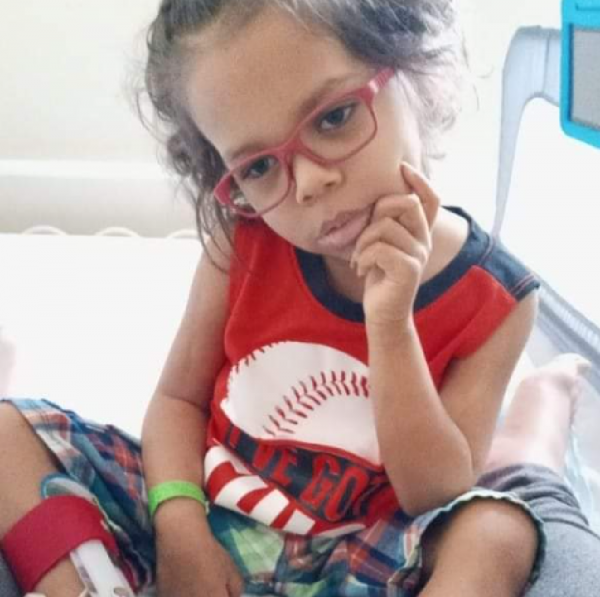 Thank you for supporting me and the more than 300,000 kids worldwide who will be diagnosed with cancer this year. By sharing the gifts of your time, talent and money with the St. Baldrick's Foundation, you're supporting research to give all kids with cancer a better chance for a cure. Jacob is a 4yr old who at the age of 2, just 2 days after Christmas 2018, was diagnosed with brain cancer. His tumor was a Grade 4, and his cancer was called Choroid Plexus Carcinoma. By the time we found his cancer his tumor had grown so large it had taken up almost the entire left side of his brain, and had caused hydrocephalus. Due to the size and vascularity of his tumor it took two attempts for it to be fully resected, during the first attempt he had a stroke. Between the damage from the tumor and stroke he now has right side hemiparesis, prone to seizures, can not crawl, walk, or stand on his own (Yet!), and is cognitively delayed. Jacob spent 8 months in the hospital 24/7, 6 of those months were treatment months (first month was surgery recovery), and the last month was in-patient physical rehab. The first 3 months treatment were with several very harsh, high dose chemos, the last 3 months were stem cell transplants. The stem cell transplants were his own stem cells that were taken after his first month of chemo. For his stem cell transplant he had to go through even harsher and stronger chemos that were so strong they would destroy his body's ability to make stem cells...then 2 days after chemo he would get his stem cells (which smells like horrendously cooked creamed corn! Which I can no longer eat) He had several complications and set backs, but he still pushed through and is now 2yrs N.E.D Now, he deals with the after effects of adult chemos used in a child's body. Slowed motilityGtube fed due to oral aversion due to severe mucositis during treatmentNeuropathy Prone to seizures Immune compromised Chronic constipation Cognitive delays HIGH risk of a secondary Cancer High risk of cancer as an adult And many more issues due to lack of research and funding for research for childhood cancer. Childhood Cancer is NOT rare, our children deserve so much more!!