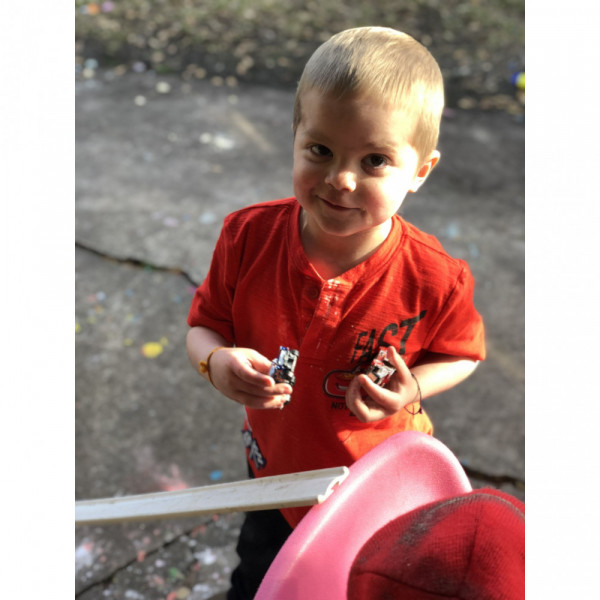 On February 1st, 2017, Jackson was diagnosed with Standard Risk PreB ALL. From the moment the dr told me about the markers for pediatric cancer life as we knew it was changed, the rooms filled with Drs and people wanting to know what is going on. It was all so abrupt, like someone just ripped the rug out from under you. Jackson was good for the most part. There were things they needed to do to him to help him get better and most of those things can be painful and scary. To start there needed to be a bone marrow biopsy to determine how much of his bone marrow was infected. (60%) For the first month of treatment (induction) Jackson and I (his mother) did not spend a moment apart, he went through a lot of IV pokes, several procedures that he needed to be under anesthesia for, lots of not feeling well, and he was on a daily high dose of steroids, which caused a number of terrible side effects, for 29 days. At the end of 29 days, Jackson needed to have another bone marrow aspiration to see how much of the leukemia they could detect to proceed with treatment. Well unfortunately the bone marrow showed that he still had detectable leukemia cells, so from there Jacksons diagnosis was changed to Very High Risk ALL, because they saw positive changes in Jacksons DNA he was moved to High Risk. Jackson began his next phase of treatment for HRALL in march, Jackson's birthday is March 22nd, he turned 4 years old. He learned how to swallow a pill before his birthday! It has proven to be very HELPFUL! Because Jackson was on a HRALL protocol that meant he had to have more chemo than a standard risk protocol. About half way through the second phase (consolidation) we were informed that Jackson had missed an oral chemo that he was supposed to be taking during the 1st 2 weeks. Being that this had happened Jackson still needed to get the 4 weeks of oral chemo, so the dr decided to change that part of the protocol for jackson. So jackson was given the oral chemo for 4 weeks consecutively instead of broken up into 2 week intervals. Jackson began to get sick about a week into the 2nd month. We started hospital stays on April 20th and he is currently in the hospital for an infection on his lungs as well as another virus. Because of the 4 weeks of the oral chemo during consolidation, Jackson's 4 year old little body took a pretty big hit. His body has struggled to recover the bone marrow because it was so suppressed from the chemo, but day by day we are seeing more and more of him getting better. He currently has been moved back to the Very High Risk ALL group.
Update: Jackson has been a patient at Texas Children's Hospital since 5/3/17, while Jacksons body was so suppressed he developed a fungus on his lungs. He has been taking antifungal medications since 5/10. We went for another CT today 6/5 and the nodules on his lungs have gotten larger and more defined. They are still working on figuring out what type of fungus. But for now he is inpatient. Thank you so much for continued prayers! ❤️
Update 2/19/18:
Last year was rough one, this year has been a little easier, somewhat. Jackson experienced so much trouble during his intense treatment I thought we would never make it to the end, and now here we are in maintenance and he’s great! He’s had trouble picking up virus’s and we have had to hold and change chemo dosing for at home. But otherwise he is a kid again! He gets to go to school, play with his brother and sisters, he gets to play outside and run and be in sports. Jackson still has until June 2020 of his Maintenance treatment. I pray for as many good days as I can get. ❤️ Thank you always for your support and love!
Thank you so much for all the love, prayers, and support! And thank you St. baldericks foundation, for being here for all of us! ❤️