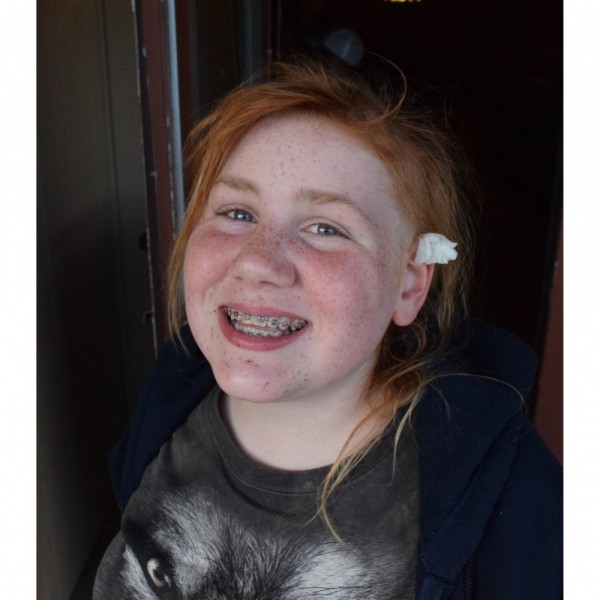 One of five St. Baldrick's Foundation 2014 Ambassadors Read more of Grace's story on our blog. Grace’s parents knew she was a miracle right from birth. Grace came into this world 14 weeks early and weighing only 2 pounds. After months of special medical care, her parents had hoped their hospitals days were over. Then, when she was 5, Grace began to complain of intense headaches that were often followed by spells of vomiting. She was diagnosed with medulloblastoma just a few weeks into kindergarten. Grace underwent surgery to remove the brain tumor, followed by high-intensity proton beam radiation and 9 months of chemotherapy. When Grace’s mom explained that she was going to lose the fiery red hair that had always gotten so much attention, Grace treated it as a new adventure. Her mom puts it simply: “Grace is Grace.” Grace is now 15 years old and cancer free. Her iconic hair has grown back, but she still deals with the long-term effects of her cancer treatment, including hearing loss, cataracts, and growth issues. Cancer didn’t damage Grace’s spirit. She carries the strength and determination that she fought cancer with wherever she goes. Her teachers say she’s a bright, creative student who has overcome many obstacles on her way to a promising future. Grace loves animals and she wants to be a veterinarian when she grows up – as well as a hairstylist, and a mom. Grace enrolled in babysitting classes to prepare for the arrival of her baby sister. She is relishing the role of big sister to her newest sibling, Esmae, and continues to look up to her own big sister, Fiona, for advice. But Grace has already proven she’s a natural. She handles this newest task like she does everything else: with grace. __________ In her mother's words:
"Grace is a compassionate and vibrant 14 year old who is particularly good at finding silver linings. She is an exceptional sister, daughter, and friend. She loves to swim, play with her dog Stormy, read, get dirty outside, travel, and build with Legos. She loves Buffy and Vampire Slayer (especially the Fear, Itself episode), Marvel Superheroes (especially Black Widow), and Lord of the Rings (especially Legolas). Halloween is her favorite holiday.
At age 5, just as she was beginning kindergarten, Grace was diagnosed with medulloblastoma. She endured surgery, proton beam treatment, and chemotherapy throughout the year that followed. The side effects of treatment are many, but she is here with us and thriving.
In 2014, Grace proudly served as a St. Baldrick's Ambassador. She enjoyed knowing that a poster with her image was hanging up at events all over the world, and she was pleased to be able to be doing good things for others kids. Today she has the Grace For Good Hero Fund that has exceeded $100K for brain tumor research and survivorship.
Grace says she would like to become a veterinarian or a hair stylist. She is a huge fan of WICKED and would like to perform on Broadway and meet Idina Menzel. She also hopes to someday visit New Zealand. This fall she will be 10 years beyond her cancer diagnosis and will begin high school at School One in Providence, RI.
Learn more about Grace through her St. Baldrick's Hero Fund. http://www.stbaldricks.org/hero-funds/graceforgood/. #GraceForGood