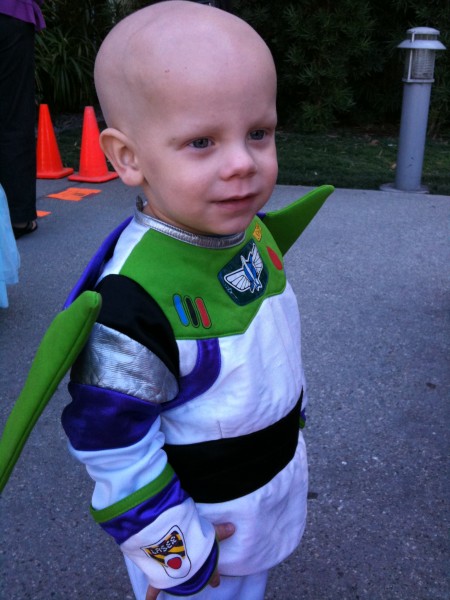 Garrett was diagnosed with neuroblastoma in April of 2009 after suffering intense head pain, sensitivity to light, and frequent falls. His primary tumor was next to his spine on the left side and had spread to his bone marrow and several places on his skull. He endured 6 rounds of chemotherapy, high dose chemo followed by a stem cell rescue, 12 rounds of radiation, 6 months of oral chemo, and 6 rounds of immuno-therapy. In between his treatments he has had multiple scans with sedation, various tests including multiple bone marrow aspirations and biopsies, blood draws, doctor visits, and periods of isolation. Now, three years later, he has no evidence of disease. He is one of the impossibly fortunate ones. Neuroblastoma has a five year survival rate of 46% to 66%. Relapsed neuroblastoma has no cure, and approximately 50% of kids with Stage IV neuroblastoma, like Garrett, will relapse. Garrett is now a seemingly healthy, active 5 year old boy. He will start Kindergarten in the fall, and plays soccer and baseball. Despite all the toxic treatments he was subjected to, he is a smart and funny little boy. He has a special spirit about him that charms complete even complete strangers. However, we never forget that, statistically, Garrett shouldn't still be here with us; we have seen too many kids with the same type of cancer pass away over the years. It is only because of research, the type funded by St. Baldrick's Foundation, that I still have my son with me. I remember that every single time I see him running, laughing, playing... Every time. Thank you for coming to this web site, for reading Garrett's story. Please make a donation to St. Baldrick's Foundation. Research is the only way we will ever find a cure for these diseases, and St. Baldrick's Foundation is doing the best work possible to ensure pediatric cancers get their share of funding. Surviving childhood cancer shouldn't be the exception.