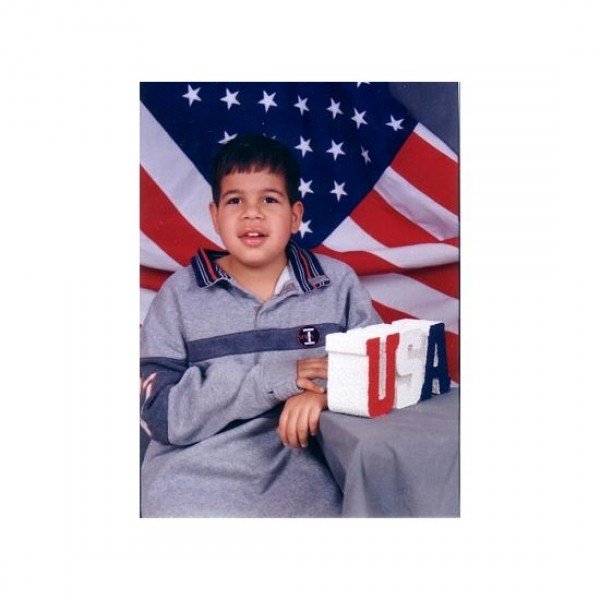 Our little warrior, Davin, was born on January 12, 1992. He was born prematurely at 35 weeks after an induced labor due to pre-eclampsia. Although he only weighed 3 pounds 15 ounces at birth, he quickly gained weight and began living a normal, healthy life. In February 1994, Davin’s stomach became bloated and very hard to the touch. We took him to the doctor and after numerous tests he was diagnosed with Acute Lymphocytic Leukemia. Davin went through a two and a half year treatment protocol consisting of various chemotherapies. He was making great strides with his illness until May 1996 when he had a relapse in his central nervous system. He then started a new treatment protocol consisting of chemotherapy and radiation therapy to his brain and spinal cord. He successfully finished treatment in March 1998 and he has been in remission ever since. PRAISE GOD!! Although he finished his Leukemia treatments and his blood counts remain stable, the treatments have taken a toll on Davin. The radiation therapy he received at such an early age has caused many delays, both mental and physical. He is currently on a pre-school/kindergarten learning level, although he is eleven years old. He has also developed seizures. The doctors also believe that the radiation was the cause of his newest battle. Davin’s most recent battle was his diagnosis of a mixed malignant glioma brain tumor on November 1, 2002. Davin wasn’t feeling good the week of Halloween and after a visit to the doctor we were told that it was just a virus; Tylenol and plenty of fluids should do the trick, so they say. On Halloween night, he began to have weakness on his right side and increased seizure activity, so we took him to the Emergency Room. We knew that this wasn’t “just a virus”. A CAT scan and MRI were done and the hospital staff informed us that he had a huge mass on the left-frontal area of his brain. What a HUGE blow for someone who has already been through enough in his short life!! Everything seemed to move by so quickly the days after the diagnosis. Brain surgery was performed on November 5, 2002, and the neurosurgeon was able to remove 90 to 95% of the tumor. We were told that it was a very aggressive malignant glioma and Davin was given a 5% survival rate between 8 to 12 months. How devastating!! Davin started daily radiation in combination with daily chemotherapy (temozolomide-100 mg per day) on December 3, 2002. On December 5th, he started having weakness again on his right side. Another MRI was performed and it was found that the tumor was already growing back in two different places. We were then given the option to call in hospice and make him comfortable or increase the radiation area to cover more of his brain and possibly suffer more side effects. We choose to keep fighting!! After a four week “rest” following the initial daily treatment plan that was finished on January 17, 2003, Davin started a protocol consisting of five consecutive days of Temozolomide (250 mg per day) every 21 days. We will continue to fight this beast!! It seemed as if Davin was making great strides with his brain tumor. He seemed to be more responsive in school; learning more and more each day. In November 2003, a little over a year after his original diagnosis, Davin started having problems with his balance and was also complaining of headaches. In our hearts, we knew that this terrible tumor was back. He had an MRI done and surgery was scheduled. He would go in for surgery on November 28, 2003, the day after Thanksgiving. When they opened Davin’s skull, they discovered tumor cells everywhere. There was no way they could operate. At this time, we decided to call in Hospice. Davin was so tired. We could see it in his eyes. Hospice was started on December 9, 2003. Davin peacefully became our precious angel two short days later on December 11, 2003. Please help us to find a cure for this horrible beast. We will forever love you Davin…Our “sweets” always!!