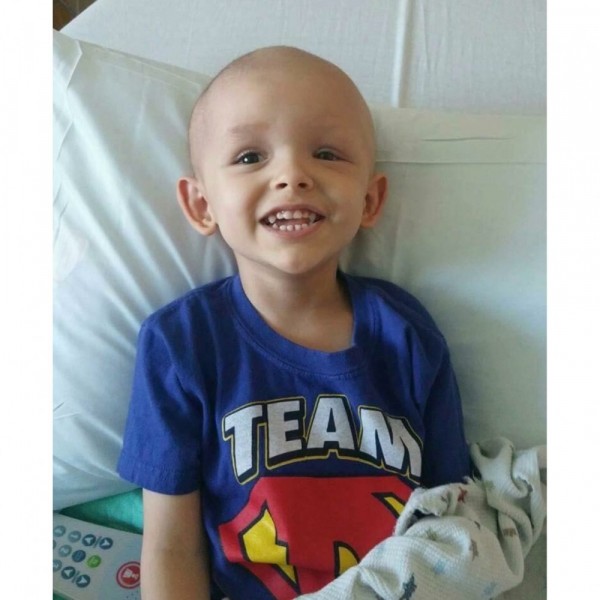 Damian Michael Creed, forever 4, dx May 25, 2014 with non-hereditary unilateral retinoblastoma, an eye cancer that is 98% treatable. After 7 cycles of IAC, his left eye was removed on July 2, 2015. On September 8, 2015, we learned that it had metastasized to his brain, a port was placed and he started high dose systemic chemo. His oncologist sent him to UF Proton Institute in Jax for proton radiation and they said they wouldn't take him because they were unsure of the long term effects. I told them I wasn't leaving until they agreed to treat him because those risks don't matter if he isn't here. They agreed and he completed 30 sessions of craniospinal proton radiation and boosts to the eye and brain. He started maintenance chemo after proton and March 1, 2016, we learned that he had relapsed and it metastasized again, this time to the spinal fluid. We were given a terminal dx then. He was started back on the high dose chemo and underwent a stem cell transplant June 9, 2016, where he was in the hospital for 6 weeks. We enjoyed the summer and got a call from MSKCC that they wanted him to be a part of a neuroblastoma leptomeningeal trial. September 1, we went to NYC. They placed an Ommaya Reservoir in his head and he was set to start receiving 3F8 antibody treatment when we learned that he had relapsed again. This time there were solid tumors in the spinal fluid of the brain and spine. MSKCC said there was nothing to be done so we went back to Nicklaus Children's Hospital in Miami. His oncologist started him on a modified protocol, hoping to buy us some time with quality of life. He was given intrathecal chemo through the Ommaya and a medium dose of systemic chemo. The following day, Damian lost the vision in his good eye due to full optic nerve invasion. He had intrathecal chemo 3 more times, the last being October 21, and we were told they couldn't do anymore, as he was at a very high risk of strokes. He passed away at 10:26pm on November 5, 2016.  My sweet boy was a huge lover, he would walk up to strangers and make them hold hands, he loved kisses, pretty girls, and life. He was the real-life Spider-Man and I called him the Wal-Mart greeter because he had to say hi and bye to EVERYONE. He had the biggest heart and has left a huge mark on the world.