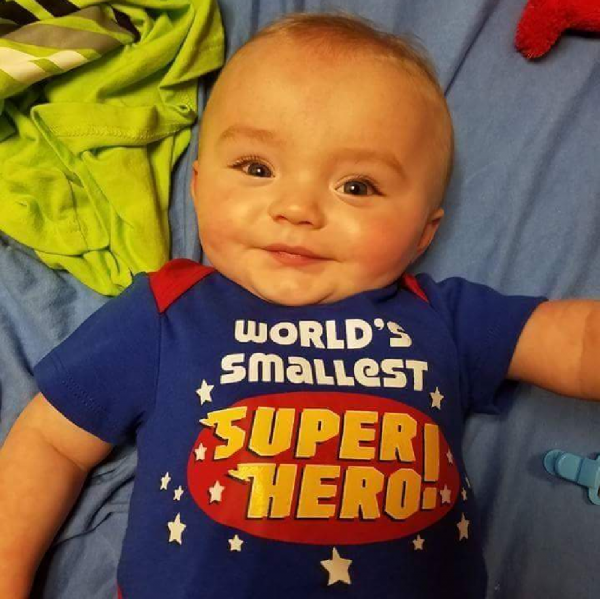 Cash and his twin brother, Camden were born on Dec 5, 2015 at 33 weeks. Their first few weeks of life were rough, but they are tough little boys. On July 8th,  2016, at 7 months old, Cash woke up unusually fussy. We called his primary Dr and couldn't get in for a week. On a whim, we decided to call a Dr (non military) to just get him checked out. We took him in and she did an xray. Not liking what she saw, but not really knowing what it was, she sent us 45 minutes away to a children's hospital. They did an ultrasound and then put us in a private room. It was after they started giving our other 3 children snacks, crayons and toys that we knew something wasnt right. We thought maybe a hernia since he has had an umbilical one since birth. The doctor came in and said they saw a mass on his liver and it had ruptured. At that moment, we knew our life was going to change. After his diagnosis of hepatoblastoma, they scheduled his liver resection for 3 days later. The resection went well and all seemed well and he was on the mend, with some chemo rounds in his near future. 1 week later, his drain tube had become loose and all the drainage was leaking into his abdomen cavity and his blood stream. The next day he went into septic shock and we were told the outcome was not good. He had ecoli in his blood, as well as other infections from the drain tube becoming loose. He was placed on life support and remained on it for over a week and a half. We were literally watching our baby die. Miraculously,  a week and a half later, our sweet boy was tested by taking him off the support and was breathing on his own. It took about a month to wean him off all the pain meds he was on and it was touch and go. A month later, our sweet boy was able to go home with us,  but was to remain on tube feedings throughout the day and night. His first chemo treatment was the last few days of his hospital stay and every week, for months.  He completed numerous  rounds of chemo,  and finished his last one in late November. After many months of weekly testing his AFP, he got to ring his "no more chemo" victory bell, on March 10th, 2017, which is also his older sisters birthday. As of today, he is NED. Praise God.  He has had no problems catching up with his twin brother and is now walking and starting to talk. He is our little warrior. Our true hero. Thank you for helping Cash and other kids just like Cash get closer to a cure. These children are our future and we are their voices. Please help us fund research to give all kids with cancer, a better chance for a cure.