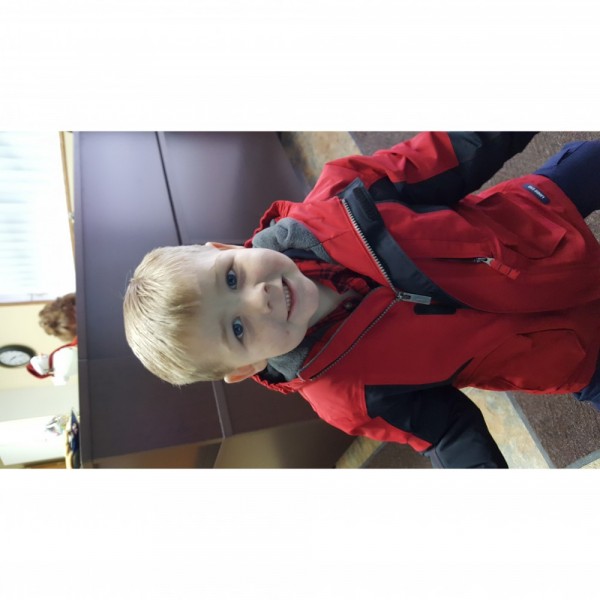 February 2017
Casey is now a 4K student and doing great in school.
He is now on maintenance for treatment.  He takes nightly chemo meds, methotrexate on Tuesdays, mega dose of steriods for a week and some tummy medicine to take with the steriods.  His maintenance treatments will last until August 2018.
On June 9, 2015 Casey was diagnosed with Pre-B ALL (leukemia). As we look back a few months before we could see that something was just not right with Casey health wise. He was just not his normal upbeat self. He was tired alot and then very fatigued. Right before diagnosis he could barely walk and just didn't have the strength to even move. He would get these funny little bruises all over. At first we figured he was just a little boy who was kinda clumsy and would fall and get bruised. I mean what kid doesn't have bruises on his legs from crawling around and playing outside.He was always drinking water, lots and lots of water so much that in my mind I wondered if it was diabetes that we were going to be dealing with. He also was experiencing fruity breath. Then one day out of the blue, he threw up. In his three years on this earth he has never thrown up.One day he just stopped walking and was just not right. So, again his mom and dad took him to the doctor. This was the third time in a months time and this time the doctor ran some tests. It wasn't diabetes, but all indications showed it was probably leukemia.So they called Children's Hospital in Milwaukee and the ambulance team came and got Casey from Fond du Lac. He spent the first 6 days of diagnosis in the hospital getting all kinds of tests and medications. He has been seeing the doctor's at the MACC Fund Clinic every week, sometimes twice a week. Every four weeks he has a lumbar puncture done to make sure there are no cells in his spinal fluid, hiding out. He gets chemo treatments once a week on Tuesdays. Recently he was admitted into the hospital for a 101.8 fever. Which turned out to be a virus, but he was also dehydrated and this sodium level was low. He was experiencing some pretty severe leg pain because of it. In the beginning of this journey the treatment Casey was receiving was pretty hard on him. He ended up having severe pain in his feet and lost his ability to walk due to muscle weakness. For 30 days or so he had to be carried around and basically didn't get off the couch or out of his bed. As a caregiver, that was very hard to see. A once thriving child who played with his tractors all day long could no longer lift his head off his pillow. He was enrolled in Physical Therapy and has been attending ever since. Once again he is having issues with muscle strength and balance and he will probably always have moments of weakness throughout his treatment.He hasn't started his maintenance portion of treatment yet. Hopefully that will start in February. He is 3 1/2, bald from losing his hair, emotional (mostly from his meds) strong willed, loves tractors, anything to do with the farm and trains, and is our hero. He says he likes having no hair!Thank you for supporting me and the more than 300,000 kids worldwide who will be diagnosed with cancer this year. By sharing the gifts of your time, talent and money with the St. Baldrick’s Foundation, you're supporting research to give all kids with cancer a better chance for a cure.