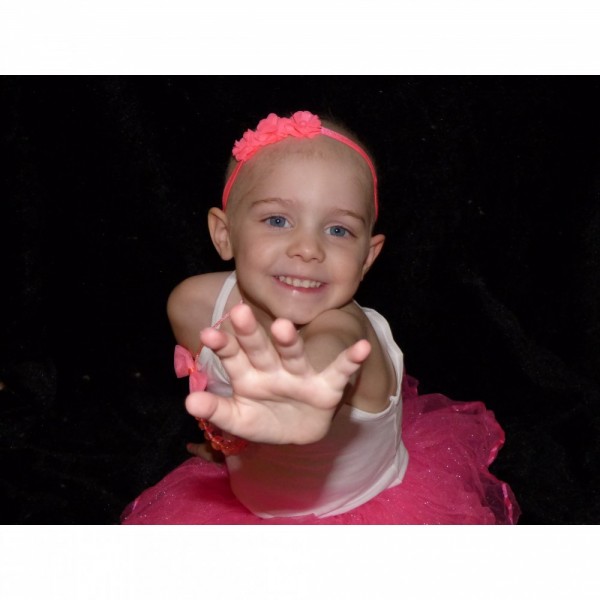 Thank you for supporting me and the more than 300,000 kids worldwide who will be diagnosed with cancer this year. By sharing the gifts of your time, talent and money with the St. Baldrick’s Foundation, you're supporting research to give all kids with cancer a better chance for a cure. Here is Abby's Story... Abby started to show symptoms early in 2014, right around her 3rd birthday. She started having ear infections which typically only happened when she was cutting teeth (she had them all already). She became pale and was labeled Anemic. She started iron supplements about a week before she was diagnosed. She started to complain that it was too difficult to climb the stairs and it hurt when we brushed her teeth. It was when she started bruising that I became extremely concerned. She was using the potty one day and slipped, I caught her by grabbing her wrist and almost instantly, she bruised. They told us it would take about a month before the iron supplements would adjust her blood counts, so I took it as that. She was having tummy pain but she has always had constipation issues so we thought that was her problem. It wasn't until my husband said that he was worried that I knew I wasn't paranoid. That was all I needed to hear to pack her and her sister up. We dropped my youngest, Zoey ( who had just been cleared from a "Cancer Scare" about a month prior) off to my sisters with an overnight bag, "just in case". Never did I image us heading toward the journey we are on. We arrived at the ER, Abby very tired and me convincing my husband, that she had a reaction to the iron supplements. The woman at the desk noted that she looked "super pale", I explained she was Anemic, she didn't look convinced. Triage Nurse asking questions and after each question seeming more concerned. She was put in the hallway because there weren't any rooms. A woman who I thought was a nurse came over asking the same questions I just answered, typical no big deal. As she was asking the questions she looked more upset with my answers then what I was feeling. Abby was answering all of her questions and making her laugh. Dr. Jenny was her name. Dr. Jenny wasn't a nurse; she was a very concerned Doctor. She got us into a room and explained she was going to take some blood for tests. Abby was okay with this, to my surprise. They told her the IV was puzzle piece to find out what was making her so tired. She was fine with that. Actually watch them put it in and asked questions about it. My three years old was stronger than me at that point and little did I know at that time, she would give us more strength than we ever thought we'd need. Dr. Jenny walked in and shut the door. From that point things became fuzzy. "Her Hemoglobin's are 4.4"(should be about 11-12). "She will need a blood transfusion" I held my tears in as much as I could when Dr. Jenny said "I'm not done, She will be admitted and see a Hematologist in the morning and will most likely need a bone marrow draw." I knew what that meant... Leukemia. Abby had blood and platelet transfusions over the night. She had an X-ray and an ultrasound over night. She did these things with little to no fear. My strength laid in my three year old. Morning came and so did Dr. Pearce.  Abby went for an MRI to see if there was a tumor that was causing her hearing issue. While she was in there, Dr. Pearce came in to confirm that Abby had ALL (Acute Lymphoblastic Leukemia). She was put in the 85-90% for survival. Even though that's great, no one should have to hear their child is on a percentile for survival! Height? Weight? Sure! Abby was always 90% for height and 50% for weight.  Since diagnosed to the end of front line treatment(7 months), Abby has had: 2 bone marrow draws, 33 days of outpatient clinic chemo(sometimes multiple types in one day), 2 port insertions because the first one somehow moved(surgery), over 40 visits to clinic, 4 days of hair loss, 3 emergency visits, 12 lumbar punctures(spinal taps/sedation), over 50 pokes, 2 MRIs, 1 CT scan 2 X-Rays, 1 ultra sound, 1EEG, 1EKG, 6 platelet transfusions, and 6 blood transfusion, numerous days of steroid pulses and other chemo pills. My daughter brings so much strength to our whole family. She makes us realize the small things in life, aren't worth sweating over. After spinal taps, she dances in hallways, after chemo she wants to stay and play with the other kids. She loves her "clinic friends" aka her doctors and nurses. She loves the finger prick lady but doesn't like her pricking her finger.I explained to Abby that she has Leukemia or "kemia" as she calls it, as sad faces in her blood that we need to help make happy. She seemed okay with that explanation and even helped explain it to her cousin. She tells everyone that she is "kickin kemia's butt" and that is what my little girl is doing. Thank you for taking the time to read Abby's story through my eyes. Mostly thank you for becoming part of something amazing. I'm grateful for the research we have so far and that my daughter even has a percent of a chance live. However, there needs to be more research done so other families and other little girls and boys have a fighting chance like my sweet girl. Even though I am so proud of her going this far with minimal complications, she still has two years left of chemo. There has to be a better answer.