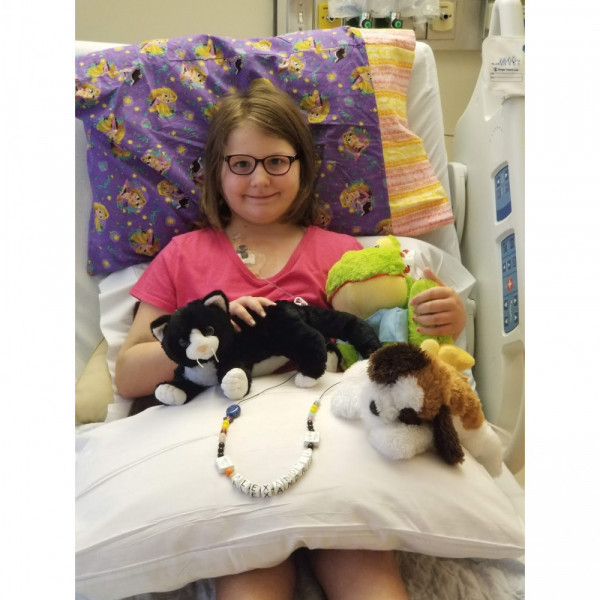 Thank you for supporting me and the more than 300,000 kids worldwide who will be diagnosed with cancer this year. By sharing the gifts of your time, talent and money with the St. Baldrick’s Foundation, you're supporting research to give all kids with cancer a better chance for a cure. The summer of 2018 started out like all summers do with swimming and plans for great adventures, however, this one was not to meant to be. Allie was tired and out of sorts for most of the summer and we honestly suspected that she had been exposed to Mono at some point. On August 2nd, the doctors ordered some blood work, including a CBC. Much to my surprise and horror her WBC (white blood count) came back very low, so low in fact that we were told to go right to the ER. My immediate thought was of course cancer but based on all of her other symptoms (or honestly lack thereof) that was not a concern from the doctors perspective. She was admitted and spent one night. The prevailing thought was that she had been exposed to a virus and her body was struggling to fight it. We scheduled a follow up appointment for August 15th with the hematologist. At that appointment her counts had not changed at all so a bone marrow biopsy was scheduled. Once again they did not suspect leukemia, but instead we were introduced to the possibility of bone marrow failure. Due to her low WBC and ANC (absolute neutrophil count) we were advised to not have her start school and to keep her home until after the biopsy. Her biopsy was schedule for August 29 and the two weeks between were incredibly difficult. We were told that if her temperature was above 101 she had to immediately go to the ER because her body was essentially unable to fight any infections. A week before the biopsy she started running low grade fevers that would wax and wane. She would hoover around 100 for an hour and then go back to 97 only to rise again a few hours later. She was so exhausted she could not do anything but lay in bed and often had difficulty walking around the house for more than a few minutes. At this point I knew deep down that no matter what we had been told that it was leukemia. The morning of the biopsy I took Allie to the hospital where she was sedated for the procedure. She wound up having a reaction to the anesthesia which forced us to remain in the hospital longer than expected. As we were waiting for her to be cleared to go home a team of doctors walked in and at that moment I knew before anyone spoke. Sure enough despite what we had been told she did in fact have Leukemia. Allie has been a strong warrior since her diagnosis. She is currently still in her induction phase of chemotherapy and travels back and forth to the hospital twice a week for chemo and blood counts. She is facing this strange new future with her strong spirit and sense of humor.