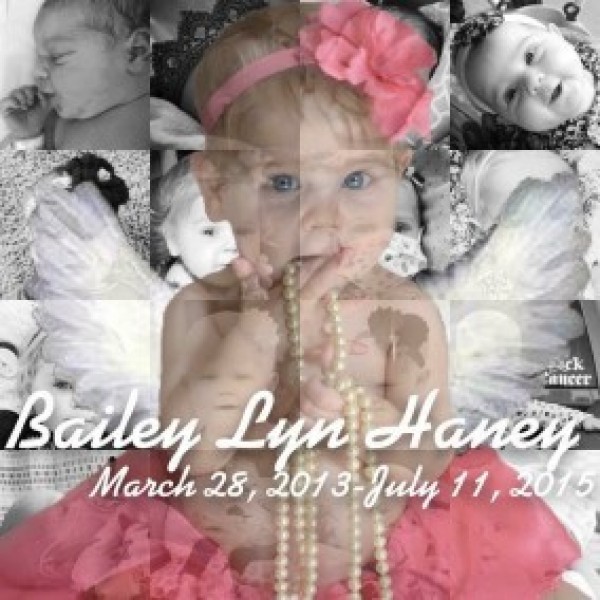 Going Gold for Bailey - In Memory of Bailey Haney 2016

We helped to raise money for childhood cancer research

Going Gold for Bailey - In Memory of Bailey Haney 2016

We helped to raise money for childhood cancer research

On August, 19th 2014, 17 month old Bailey was admitted to Children's Hospital Los Angeles as a result of unexplained black eyes. After enduring several blood transfusions, biopsies and surgeries, Bailey and her family received devastating news; she was diagnosed with high risk Stage 4 MYC Amplified Neuroblastoma. On August 25th 2014, Bailey began her battle by undergoing several rounds of chemotherapy, stem cell retrievals, and surgery to remove the grapefruit sized tumor near her kidney. In early January 2015, after completion of MIBG therapy, Bailey was discharged from the hospital. She began to recuperate with her family at home. Sadly, in February 2015, the cancer became more aggressive and spread to Bailey’s central nervous system. She was paralyzed from the waist down. Bailey was readmitted to CHLA where she remained inpatient for nine weeks. During this time, Bailey continued to fight and underwent more radiation and chemotherapy. Bailey was released from the hospital in April 2015 where she enjoyed time in her own home with her mom, dad and brother Jackson. She continued to receive outpatient chemotherapy. In early June, Bailey underwent a bone marrow aspiration and biopsy procedure in preparation for a tandem transplant. The aspiration was positive, however the biopsy itself was negative. Then, on June 15th, Julia noticed that Bailey’s leg was swollen. She took her to the emergency room, and the doctors performed an MRI of her leg. Sadly, the MRI results proved that Bailey’s cancer had spread to her femur. Her team of doctors concluded that her treatment could not continue. The cancer was spreading too fast. Bailey returned home to spend precious time with her family and close friends. She was kept as comfortable as possible. Julia and Matt took Bailey to CHLA on July 9th to help manage Bailey’s pain. On July 11th at 1:40am, Bailey took her final breath. She was cradled in the arms of her daddy, surrounded by love. Bailey, her mother Julia, her father Matt, and her brother Jackson fought with all of their strength until the very end. The Haney’s continue to fight today. Thank you for supporting Bailey and the more than 175,000 kids worldwide who will be diagnosed with cancer this year. By sharing the gifts of your time, talent and money with the St. Baldrick’s Foundation, you're supporting research to give all kids with cancer a better chance for a cure.