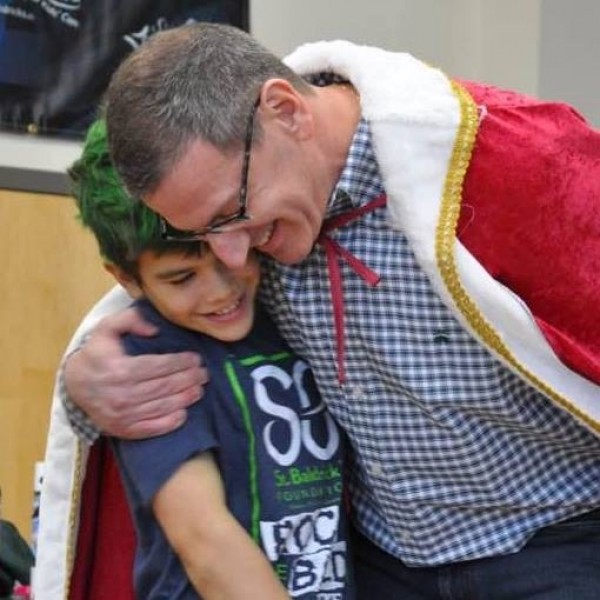 In the 14 1/2 years that Mark and I have been parents, we’ve heard the words “Your child has cancer” on three separate occasions. And each time, it stunned us and terrified us and brought us to our knees.

But every day we know that we’re the lucky ones because we’ve never had to hear the words, “There’s nothing else we can do.”

And the reason for that is medical research. If Austin had been diagnosed with his rare cancer twenty years earlier than he was, I’m pretty confident he wouldn’t be here today. Pretty positive, in fact. But somebody twenty years ago funded the research that saved his life. Now it’s our turn to do the same for some other child, and some other mother, twenty years from now.

I don’t run this St. Baldrick’s event for Austin, although it certainly felt that way in the beginning. Today’s truth is that Austin doesn't have cancer and, at the risk of inviting bad luck, I don’t believe he ever will again. If I really wanted to do something for Austin, something that would actually benefit him as an individual, I’d be raising money for kidney research. That’s our next big thing.

But this isn’t for Austin. And it isn’t even for Rebecca, though she too is a driving force. This St. Baldrick’s event — and all the money that comes with it — is for the next kid. The one whose name we don’t know yet, the one whose health updates don’t appear daily in our newsfeeds. It’s for the parent who hasn’t ever had to hover over a hospital bed, watching the lines on a beeping machine, the parent who’s never had to write a CarePage update, who’s never imagined holding their dying child. That parent out there who is innocently watching their healthy child, worrying every day worries, celebrating everyday successes, with no inkling of what’s to come.

Because we were all that parent once. Every one of us who’s walked around the pediatric oncology floor with a cup of weak coffee and a dazed look in our eyes was once a normal parent, with normal expectations, normal fears, normal hopes.

So, until fewer and fewer parents have to hear, “Your child has cancer,” and until NO parents have to hear, “There’s nothing else we can do,” I will keep fighting this fight. I will keep running this event, begging for volunteers, pressuring people into parting with their hair, harassing them to raise more more more. I will keep honoring our children, the few we’ve lost and the few we almost lost, alongside the many who are brave enough to sit in the barber’s chair and shave it all off for someone else. I will keep shouting from the rooftops that this is important and necessary and urgent. I will keep fighting.

And you can too.