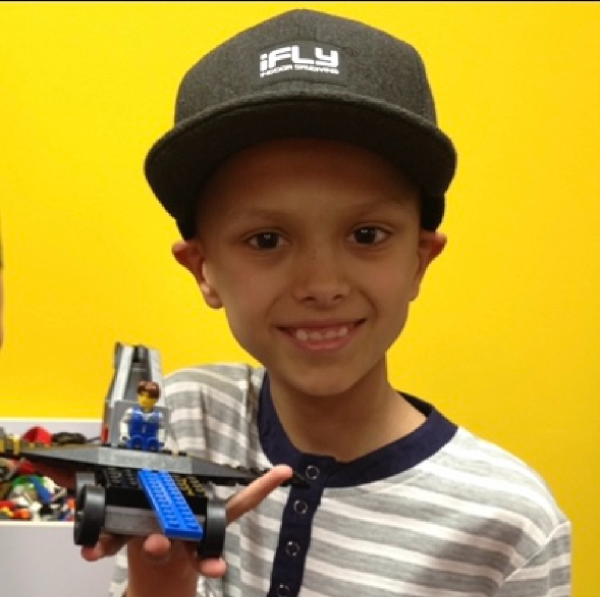 What could possibly be more important than saving the life of a child?

We would have never thought that our family would have a run in with cancer, especially one of our children. Christian was a normal healthy 8 year old boy when cancer came into our lives. He began complaining of headaches and blurred vision coupled with occasional vomiting when we made a few trips to the hospital. Each time we were told that he had a virus and were sent home. After a week of this we made a visit to his pediatrician and voiced our concerns. After a CT scan, we heard the words "brain tumor". Our lives were forever changed. We spent a month in the hospital where Christian had a full resection of his tumor, lost most mobility of his left side and had to relearn normal tasks, such as walking, etc. He endured a month of rehab followed by 6 weeks of proton radiation in Houston, TX. Finally we were back home and began his chemotherapy regimen. After completing 2/3 of his chemo and almost finished with all treatments, he began having seizures. He had relapsed in his brain fluid, there were no options left. Christian fought this awful disease for 11 months. We had to say goodbye to our sweet boy at the young age of 9. Christian was the sweetest, kindest, funniest boy you could ever be lucky enough to know. He was a friend to everyone that knew him. He was selfless in his actions, loved his family, pets, friends, and made someone laugh every single day he was on this earth. He made a life changing impact on so many simply by his beautiful smile and kind words. He was wise beyond his years. He will forever be in our hearts and smiling down from heaven, our sweet angel boy.❤ Thank you for supporting me and the more than 300,000 kids worldwide who will be diagnosed with cancer this year. By sharing the gifts of your time, talent and money with the St. Baldrick’s Foundation, you're supporting research to give all kids with cancer a better chance for a cure.

This will be our 2nd year supporting Christian's Hero Foundation which we support through an annual golf trip between Texas and Ohio.  Last year we were able to raise north of $16,000 between a group of 36 guys competing in a friendly competition which we named the Christian Cup

Team Texas has conducted a weekly league with many of their team members in which we were able to raise another $3,000.00 this year.  We are hoping to build upon last years great fundraiser with an even stronger 22' raise in honor of my sweet nephew Christian.  If you find it in your heart to donate; please designate your team selection for the Christian Cup trophy in 22'.  We will be conducting another raffle this year with the people who select the winning team as they choice!  We will have a GC in the amount of $1000.00 to the winning person this year!  I will conduct the drawing with a live video via Facebook to designate this years winner!

Thank you in advance for considering this great cause.